This is one part of “A GDS story”. Please read the introduction and the blog post that explains this project.

The intention is for the checklist to act as a guide for any organisation involved in helping people go online. In other words, if you do these things, you’re doing digital inclusion.

Janet Hughes wrote about identity assurance, explaining in detail how it works, and what role the "identity providers" (later renamed "certified companies") play.

Government published new rules for IT contracts, forming the basis of the GDS spend controls mandate. The core rules were:

These red lines will ensure the government gets the best technology at the best price and we will be unashamedly militant about enforcing them to provide value for hard-working taxpayers.

James Stewart wrote about using Git and GitHub at GDS.

Sprint GO event in London, aimed at colleagues from agencies and arms-length bodies going through transition to GOV.UK. More photos.

Government official documents moved from www.official-documents.gov.uk (run by the National Archives) to a new home on GOV.UK.

The Identity Assurance project moved into beta phase with users from HMRC.

Tom Loosemore congratulated the team at DVLA for releasing the beta of the Renew a tax disc service: "We salute you." 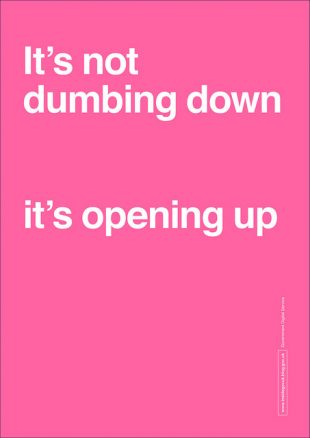 Neil Williams summed up progress on GOV.UK: "The third phase is underway now."

GOV.UK got over 50 million visits in a single month for the first time.

We encouraged readers to report misleading websites. A couple of weeks later, Ade Adewunmi wrote If you found it through GOV.UK, it's ok:

Even if they have slightly different colour schemes and layouts, behind the scenes the pages you reach through GOV.UK are all legitimate. This is not necessarily the case for sites you reach through online ads or a general search through a search engine like Google or Bing. You may end up paying more for the service than you need to, or end up paying for something that doesn’t arrive. You might also be giving your personal details to an untrustworthy source.

The Gill Sans typeface used for "GOV.UK" in the website header was replaced by New Transport.

The start of work on the Digital Marketplace alpha.

350,000 more people registered as organ donors, as a result of the GOV.UK tax disc "thank you" page.

We’re taking the lead in technology across government.  Not to tell people what to do, but to help them do the right thing, and to help them build expert teams of their own. We've replaced the previous, overly-complex IT governance for government with a simpler, clearer operating model.

GDS published the first version of its Social Media Playbook.

GOV.UK migrated to new infrastructure, and nobody noticed. (Which was a good thing.)

The Service Standard went fully live, into full force. Tom Scott explained how it had been iterated in response to feedback during the first 50 service assessments.

PSN is a network of networks, which allows public sector organisations to connect with each other securely and cost effectively. It avoids the duplication and complexity of past discrete networks that didn’t connect with one another.

This is a really exciting time for us because it’s the first time the government will be bringing together such a wide number of partners to tackle digital exclusion. We want to scale up good ideas, stop duplication and make it easier for people to work together.

Martin Richardson from the Driver and Vehicle Standards Agency wrote a guest post on the Inside Government blog, explaining how changing a single word boosted click-throughs by 600%.

83 dashboards released in one day on the Performance Platform.

GOV.UK introduced new dashboards to help people in departments and agencies see how their content was performing.

Lasting Power of Attorney was the first of the exemplar projects to go from beta to live.

On the same day, Head of User Research Leisa Reichelt wrote up her tips for making user research work better in agile.

Leisa Reichelt: "It's user research, not user testing. It's us being tested, not our users, and that's a good thing."

Pete Herlihy dropped the mic at the end of this terrific post about challenging the status quo while working on Register to Vote:

We managed to gain agreement from the legal team to work with the service delivery team when drafting future legislation. And that is a special thing.

The Identity Assurance beta expanded with the addition of a new service, DVLA’s View Driving Record.

The first of many long, detailed blog posts from Mike Bracken. This first one tried to define "service transformation":

So when we talk about "transformation", we don't just mean messing about with the hardware and software that makes things happen. We mean thinking about the whole service, getting a multidisciplinary team together, and transforming the experience for users, for the people who are seeking help when they put in a claim. We mean delivering a better experience for them, doing something that makes a genuine difference to their lives.

Mike Bracken wrote about work being done by the MoJ team to bring civil claims up to date:

It’s 2014. We shouldn’t be running public services littered with this sort of Victoriana. The law might be centuries old, but the language we use to communicate it to people shouldn't be.

On the same day, Tony Singleton wrote up another successful month for G-Cloud, with sales topping £200 million.

Stephen Kelly, founder of the Cabinet Office's Efficiency and Reform Group and a strong supporter of GDS within government, left to take on a new role in the private sector. Mike Bracken wrote:

Through this Parliament, Stephen has been an unrelenting supporter and champion of GDS and of all things digital across government. He has opened doors to Ministers, spoken at events, helped remove and route around a huge number of obstacles to delivery, and always with a positive worldview. It's that last characteristic that I will miss most.

The Economist wrote about the newly installed user research lab:

In essence, the GDS is trying to bring to government the digital suppleness that occurs more naturally in the private sector. If companies have lousy websites—or ignore the digital world altogether—they may find that customers go elsewhere. The state, as a monopoly supplier of services from welfare benefits to driving licences, many of which can be administered online, must motivate itself from within. 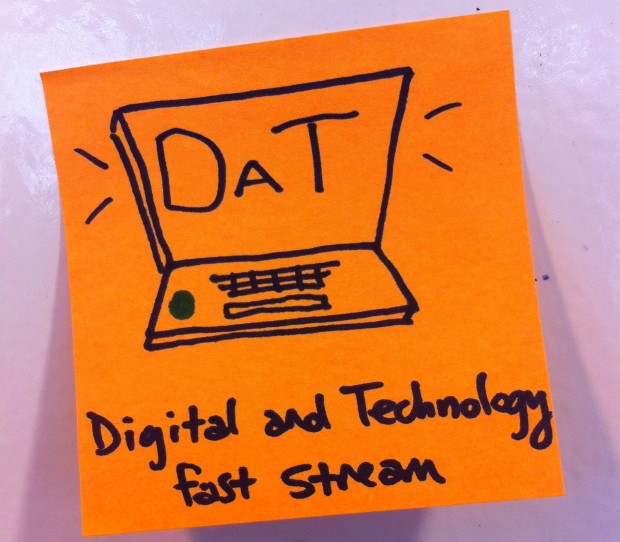 Olivia Neal wrote an update about the Service Standard:

Since April we’ve been running assessments against the full 26 points of the standard. Services are assessed at alpha, beta and live stages. So far we’ve run 27 assessments, each with a panel of four or five GDS assessors. So, what have we seen in our first five months of running assessments? So far the pass rate is 70%, and as we would expect, more exemplar services are passing assessments than non-exemplars.

Web operations engineer Bob Walker explained how the Badger of Deploy controls the process for releasing applications to GOV.UK.

Another exemplar, the Book a prison visit service, went live.

We’ve continued our user research programme and continued to refine and develop the service based on what we’ve learned in the lab and from larger-scale quantitative testing. We’ve learned a lot and changed quite a few things along the way, including our name and the design of the user interface. Having tested a range of different ways of describing the service with users, we’ve concluded that ‘GOV.UK Verify’ works better than the alternatives  as a way of telling people clearly what to expect when they use the service - so that's the name we are taking into public beta.

On the same day, Ben Holliday wrote up 6 case studies showing how user research and data could improve live services.

Well done, apprenticeships team. You’re doing exactly the right thing. This is how we imagined the transformation process working from the outset, and I’m delighted to see it actually happening. Just three years ago, even talking about this sort of radical change and service re-design would have been impossible.

The View Driving Licence service from DVLA moved from beta to live.

User research is a team sport.

Digital Marketplace became the single place to buy cloud-based services from the G-Cloud framework, fully replacing the CloudStore. MCO Francis Maude was invited to try out the new digital service for himself with help from Service Manager Ivanka Majic.

Back in June we decided to take another look at the whole user journey, so we went back to the drawing board. By starting from a clean slate, but this time armed with everything we had learned from all our research so far, we were able to come up with a simpler design that broke the decision down, asked a couple of simple questions and then made a clear recommendation.

Ivanka Majic wrote a short history of G-Cloud, the CloudStore, and Digital Marketplace.

Steve Wood, one of the GDS team members who worked on the project, wrote:

The Carer's Allowance team in Preston has done much more than digitise the paper application form. By doing user research, and diving into the detail of the application process, the team has been able to remove 170 questions from the application process – that's 49% of the questions. This is crucial because carers don't have a lot of time on their hands – a fact highlighted by service performance data which showed usage spikes in the small hours of the morning.

Kate Towsey on the first 6 months of an in-house user research lab: it was 25% cheaper, and fully booked within the first 2 months.

GDS hosted the inaugural meeting of D5 countries in London. In his speech, Minister for the Cabinet Office Francis Maude said:

Too often there is a risk aversion within the public sector. People feel unable to try new things. Governments are very good at looking at new ideas and finding reasons not to do them. They never apply the same scrutiny to the status quo. We must encourage people to experiment and take risks to find new and better ways of doing things, even if they don’t always work. The greatest mistake is to never try anything new or to stick to something that doesn’t work.

D5's purpose is to promote international co-operation. We're always talking about being open and sharing our work, and D5 makes it easier for us to do that face-to-face. It gives us a platform for debate and discussion, a chance to be supportive and to ask for support. We want to put the emphasis on practical help for specific problems.

Liam Maxwell wrote about “What we can learn from Korea”, and showed how the government technology supply chain had changed between 2010 and 2014.

Mike Bracken visited DVLA, and wrote up his thoughts:

DVLA are doing some terrific work right now. They're fixing websites, they're fixing the technology behind the scenes, and they're re-arranging the whole organisation around a new approach to user-centric service design. If that doesn't define "transformation", I don't know what does. I'm hugely impressed with what they're doing, and all I can say - all I did say when I was there - is "Well done." DVLA is a poster child for modern digital government.

The end of the transition project, which moved over 300 agencies and arms-length bodies websites to GOV.UK. Mark Hazelby wrote:

Take one example used by our training team. If you’d done a Google search for "climate change uk" before we started transition, you'd have got (give or take) 16 government websites to trawl through. Do the same search today and the GOV.UK policy and topic pages are right at the top of the list. As a citizen, that's powerful stuff and means I'm getting what I want without having to wade through government white noise.

Some significant numbers from the project:

Public sector organisations have a legal duty to make websites accessible. Find out how your organisation is impacted at GOV.UK/accessibility-regulations