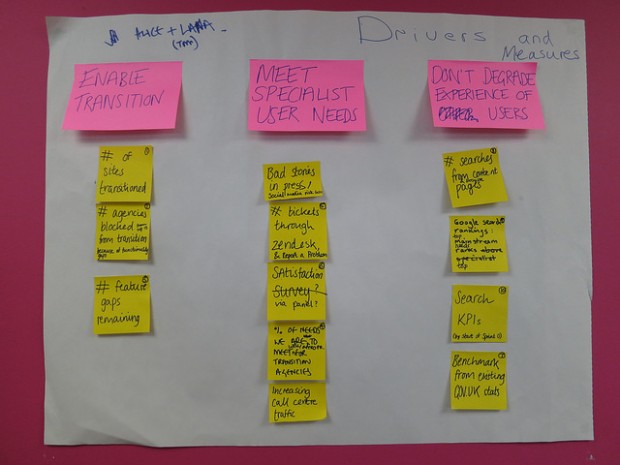 A project team in GDS is working to make sure GOV.UK can meet the needs of all its users, including specialists and professionals, when it becomes a fully-realised “single domain for government” later this year. Neil Williams, who leads the project, explains what they’re up to.

GOV.UK is GDS’s best-known product and biggest success story, but it’s by no means finished. Martha Lane-Fox tasked us with building a single domain for government, and the show ain’t over until the karaoke lady sings.

While, in fact, GOV.UK will never be finished (we will keep improving it for as long as it lives); a moment is fast approaching when we will have delivered on the original vision and reached the end of the beginning of the product’s development.

What we’ve done so far

The original vision for GOV.UK identified three distinct (but overlapping) categories of need that users have of government - “mainstream”, “democratic” and “specialist”. You might say we’ve been building towards that complete vision in phases as follows.

Phase one went live in October 2012. GOV.UK became the new home for the most commonly needed government services and information - ”mainstream” needs like registering a birth, paying car tax or employing staff for the first time.

Phase two saw ministerial departments transition in April 2013. GOV.UK became the place to see how central government works and what it is doing. This made it much easier than before to meet users’ “democratic” needs to find information about organisations from No 10 to DWP and to see their policies, announcements and other publications.

Phase three is underway now. By the end of July this year GOV.UK will become the home of services and information from the majority of central government agencies and arms-length bodies. This means “specialist” needs from hundreds of agencies - including household names like the Environment Agency, Companies House and the Highways Agency - will soon be met by GOV.UK.

There’s much more to completing the third phase than just adding a load of new content from these agencies and other bodies to the existing product.

While we’re proud of how well GOV.UK meets users’ mainstream and democratic needs, there are a number of gaps that need to be filled between now and the summer - most notably in the way the site meets the needs people have for specialist information and services.

These are the kind of needs agencies deal with in spades - things like drug safety alerts for medical professionals, guidance on reclaiming tax on gift aid, and reviewing air accident reports to spot patterns. GOV.UK has to provide new ways for users to find and browse the content that meets these needs - and many thousands of similarly narrow, deep needs.

The huge amount of this kind of content coming into the site has the potential to make it more difficult for existing users to find the content that meets their needs. So, we have to look again at GOV.UK as a whole, at how users search and browse, to ensure all users can find what they need in a much bigger site.

It’s a big test for the very idea of a single domain, and we’re not taking it lightly.

Following new year changes to support the transition programme, I’ve been working with a newly formed team of more than 30 people dedicated entirely to tackling these challenges. We are focusing our efforts on the following broad themes:

We are introducing new browse pages which will bring together content of any type from right across GOV.UK relating to specialist or professional user needs, so that users can see everything that relates to their interests in one place.

For example, this test page about oil and gas. We’re also revisiting the purpose and usability of the navigation menu that sits across all pages of the “departments and policy” section.

We will be significantly improving the effectiveness of GOV.UK’s site search. Possible changes include showing ‘scoped’ results relevant to the page from which the user began their search.

For example, when searching from the HMRC homepage, in future users may see only (or predominantly see) HMRC content in the results. It’s worth noting that for many people, site search will never be good enough (people expect magic) but it will be measurably better.

We’re attempting to tackle the question of how to help users determine whether the page they’ve reached on GOV.UK is the thing they needed, and, if not, to navigate towards the thing that better meets their need.

For example, can users recognise the difference between “free school meals” information for parents versus school managers when it’s all in the one website, and move between them if they’ve landed on the wrong page? This is a really tough problem, and will be a focus of lots of user research.

We’ll improve the presentation and labelling of guidance content to accommodate new types of document and make a better reading experience for long text pages.

We’ll be making small changes to the way we profile organisations, teams, people and roles to better reflect the variety of needs agencies and ALBs have to meet.  Whereas the 24 ministerial departments of phase two had a lot in common, the bodies joining GOV.UK now are much more diverse - so, for example, their homepages must meet a much wider variety of needs.

If you’re interested in the details of all this work, we’ll be posting frequent updates over on the Inside GOV.UK blog.

The project will run until the summer. We can’t do everything that we’d like to in that time, and GOV.UK still won’t be perfect by the time the last agency joins. We’ll be focusing on doing the best job we can for users of the 15 agencies with most traffic to their existing sites, and filling as many other product gaps as we are able to in the time available.

And of course, beyond the summer we’ll keep on improving GOV.UK based on what we find out about what users need through ongoing feedback, research and analysis.