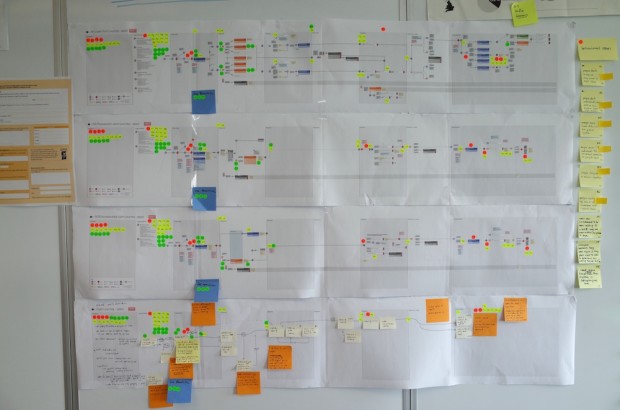 Our fourth design principle is "Do the hard work to make it simple”. A team working at the Ministry of Justice have been putting that into action recently, trying to simplify a legal process known as “accelerated possession”, just one small part of the wider Civil Claims system.

One of the hardest problems they faced was simplifying language without changing the law. It was a perfect example of doing the hard work to make it simple: the team went through the process (and the forms associated with it) almost word-by-word to see what could be simplified, as I found out when I visited them a few weeks ago.

What are Civil Claims?

Civil Claims are legal claims against other parties made through the civil courts system. Often, they're about non-payment of money owed, or breach of contract, or personal injury cases, disputes between neighbours, things like that.

Anyone can make a civil claim against anyone else. So in theory, anyone can be a claimant, and anyone can become a defendant in a civil case.

Inevitably, there are lots of paper forms to fill in. You'd think, given that anyone could find themselves involved in a case, that they'd be written in clear, plain English. But you'd be wrong.

How it used to work

The Civil Claims system, looked at in its entirety, is daunting. The team at MoJ Digital Services mapped it out and stuck the whole thing on the wall. You can see it in the photo at the top of this post. The map is a masterpiece - you can step back and see the scale of the whole system at a glance, or step closer and see tiny step-by-step details for individual legal procedures. George Sheldrake wrote a great blog post with more detail about the map-making process.

It shows in a glance that the whole system is too large to modernise in one go. That’s why the the team deliberately chose to tackle a thin slice through it, an echo of our fifth design principle, the detail of which says: “The best way to build effective services is to start small and iterate wildly” - an idea I like so much, I’ve got it printed on some of my business cards. 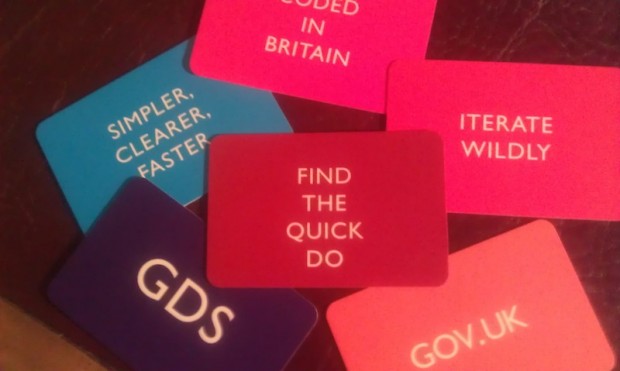 The slice they picked out to work on was Accelerated Possession, represented by a single blue box on that wall chart: 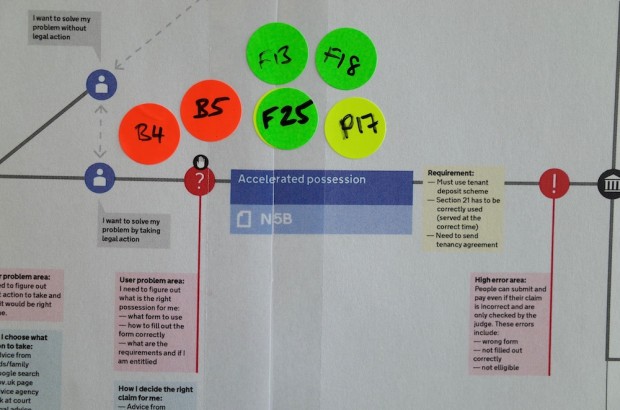 In theory, the process sounds simple enough: as long as all the qualifying criteria have been met, and the form filled in correctly, the court will order the tenant to leave the property.

In practice, though, the form that has to be filled is full of obscure legal language that makes it hard to understand. For example: at one point, it asks if the property concerned is "a dwellinghouse, or part of a dwellinghouse". 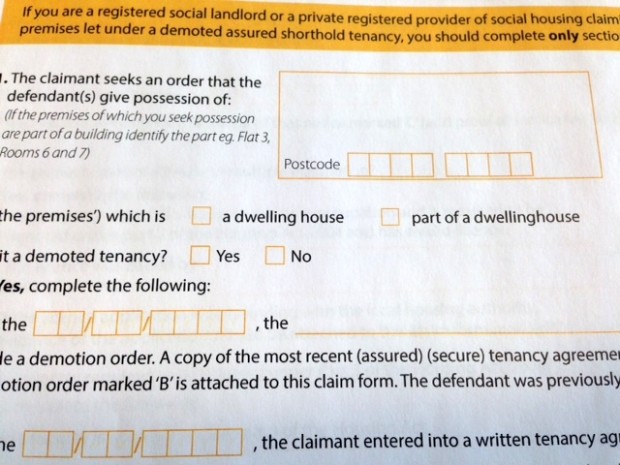 It’s 2014. We shouldn’t be running public services littered with this sort of Victoriana. The law might be centuries old, but the language we use to communicate it to people shouldn't be. Remember: anyone can be a defendant. Their list of user needs includes things like “As a defendant, I need to understand what I’m being asked to do by the court.” We can meet needs like that by using simpler, clearer language.

There are about 35,000 of these cases every year 1, and this form is just one of about 20 different entry points into the civil justice system. It’s another classic example of failure waste, which I mentioned in my post about transforming Carer’s Allowance. Failure waste is the price we pay for  not designing services to meet user needs in the first place. 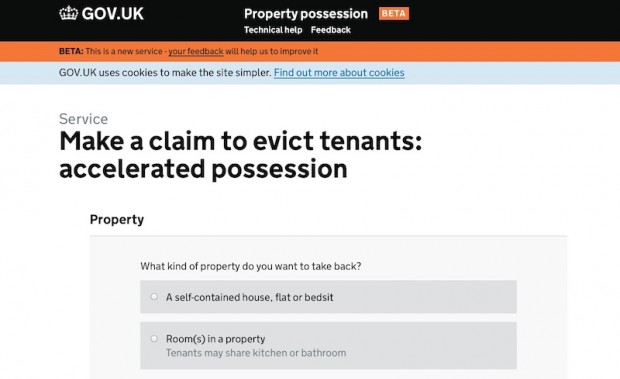 This is the beta service for Accelerated Possession. There’s still a paper form involved, but the new web service fills it out for you, and gives clear instructions for the next steps you must take after printing it out.

This beta was built in just 10 weeks, thanks to close collaboration with Paul Harris, Paul Downer and colleagues at Her Majesty’s Courts and Tribunals Service, and members of the Judiciary, particularly District Judge Lethem and District Judge Hovington. It’s a terrific example of fast, iterative delivery.

It uses much simpler, more direct language: “What kind of property do you want to take back?” it asks, with two simple options beneath. There’s nothing about “dwellinghouses”.

Simplifying the language on the form was one of the biggest challenges faced by the team. There are two ways to deal with legal jargon: either rewrite it in plain English, or keep it and provide plain English notes that explain the legalease. The team ended up using both approaches for this particular project.

As product manager Eliot Fineberg put it: “We had to find the right balance between words that are understandable and words that are illegal.” They got advice from legal experts and senior judges to make sure the simpler language didn’t sacrifice essential points of law. The result is something that’s still legally accurate, but more accessible to readers.

Building a digital version of the form also gave them the chance to design a smarter form. It can adapt, for example, and only show applicants the questions that directly relate to them and their case. That makes everything quicker and less confusing.

Using the new digital service, applicants answer a series of questions and the form is filled out for them. At the end of the process, they see a draft copy that’s all ready to print, along with clear instructions on what to do with it next.

There’s been some positive feedback from users during user research sessions.

Oh that is good. (That was someone looking at the guidance notes.)

To be honest it was a lot easier than I thought... and quite straight forward.

The form itself is very easy and straightforward to fill in.

What’s particularly interesting is that although only a few users have tried this new service, some of them have already asked: “Why do I need to print off the form and post it? Why can’t I submit it digitally?”

Good question. That’s the next step.

It was hard work, but now it's simple

We can't continue delivering public services using paper forms that people can't read. It doesn't matter whether that's because they're based on centuries-old legal practices, or because they've just been badly written and never changed.

Using simpler language worked at GOV.UK, which won awards for the quality and clarity of its written content. As a government, we have to apply the same rules right across our work. Every service should be written in simple, plain English - even if the legal stuff behind the scenes remains just as complicated as before.

My visit to MoJ Digital Services was all too brief, and I’d like to grab this opportunity to say thanks to all the people who showed me their work while I was there. I've highlighted just one project in this post, and it represents just a small fraction of what I saw. To everyone who showed me work I've not mentioned here - thank you. And well done.

MoJ is making huge strides towards building what's known within the Civil Service as "digital capability". In other words, they're hiring skilled people and assembling multi-disciplinary teams to tackle difficult digital projects. Most of the work is done in-house, rather than outsourced. Their focus is exactly where it should be: on user needs and delivery.

1. Figures from Ministry of Justice.