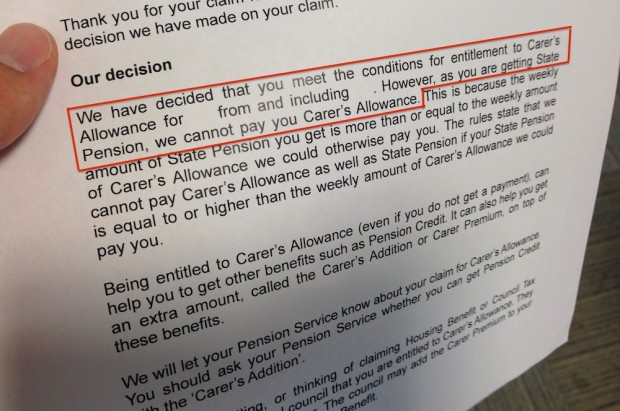 There's a letter that gets sent out to some elderly people who make claims for Carer's Allowance. It opens with these two sentences:

With the first line it offers help. And with the very next line, it takes that offer back.

So we’re fixing that - we’re working with the team at Carer’s Allowance head office in Preston to transform it into a modern digital service. I’ll come back to the letter in a moment, but first let’s take a look at what Carer’s Allowance is and how it works.

What is Carer's Allowance?

Carer’s Allowance is a weekly sum paid to eligible people who look after others. Anyone who is over 16 and spends more than 35 hours per week caring for someone else can make a claim. It doesn't have to be a relative, or someone who lives in the same house.

The poorly person - the one being cared for - must be in receipt of either Disability Living Allowance (at the middle or higher rate), or the Daily Living component of the more recently introduced Personal Independence Payment (PIP). These two benefits cover broadly the same things, but PIP is gradually taking over from DLA.

The point is that Carer’s Allowance and DLA/PIP work together. One is for the carer, and the other is for the person who needs care.

That interdependency between the two benefits means that claiming Carer’s Allowance involves answering a lot of questions about the person who needs care, the carer, how much they earn, what other benefits they claim, and more besides.

When that was done with a paper form, it resulted in a very long and intimidating document. There was a clear need to make it shorter and simpler. 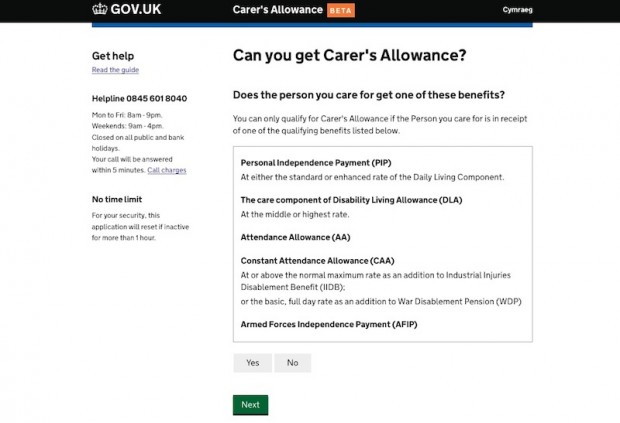 The new Claim Carer's Allowance digital service went into public beta last October, and in just over a month it had processed 10,000 new claims. It’s dramatically faster to use and works beautifully on phones and tablets as well as standard computers. The project team at DWP Digital have done an outstanding job.

Crucially, it’s much shorter than the thing it replaces. The team were able to strip out one third of the questions that used to be asked. Those that remain are written in plain English.

I visited the Preston team a few weeks ago, accompanied by Steve Wood and Allon Lister from the GDS transformation team. I spent some time talking to Julie Ward, one of their call centre staff, and she told me about her work. She had already seen the new beta from the user’s perspective.

“The online claim service is fantastic,” she told me. “I know someone outside work who has had to apply recently, and I've seen it in action for myself. I know how it works. It's a fantastic service and it really works.

“Now, when someone calls I can tell them that the online service is quicker and easier and I know it's true. I wouldn't want to recommend something I didn't know anything about.”

It’s great getting feedback like this. Julie has been working on Carer’s Allowance for years, so she knows it inside out. Her words are a fantastic endorsement.

The data looks good too. It used to take people about 45 minutes to fill out the form. Now the average time using the digital service is about 20 minutes.

The team is also working with independent carers’ support groups to find out how we can help people with little or no computer experience use the digital service.

Back to that letter - there's a photo of it at the top of this post. No-one thinks it’s a good thing. No-one at the CA office. No-one who writes policy. No-one working at GDS or in any government department. But it still goes out, day after day.

Why? Because it’s hard-wired into the system - an old fashioned, inflexible system, built up over decades. Somewhere behind the scenes there’s an outdated mainframe computer that churns these things out the same way it was designed to churn them out years ago. The result is something that makes perfect sense to civil servants, but no sense at all to the people it gets sent to.

The rules on benefits say that you can’t get two benefits that cover the same aspect of entitlement. So if you get Benefit 1 covering issues a, b and c, you can’t also get Benefit 2 that just covers issue b. Fair enough. But the letter isn’t clear enough about this. Those contradictory opening sentences simply end up confusing and upsetting already vulnerable people. Too often, they resort to calling up the Carer's Allowance team to ask for help - phone calls that could be avoided if the letter was clearer (and nicer) in the first place.

This is an example of failure waste, and it’s endemic in public services. It leads to a huge amount of inefficiency and cost to government, and an unknowable amount of problems for users. In short, we shouldn’t be running public services with word processor macros. The policy team is hands-on with this project, and they're working to help us phase out that letter. That's an approach we can roll out across other services in future, too.

So when we talk about "transformation", we don't just mean messing about with the hardware and software that makes things happen. We mean thinking about the whole service, getting a multidisciplinary team together, and transforming the experience for users, for the people who are seeking help when they put in a claim. We mean delivering a better experience for them, doing something that makes a genuine difference to their lives.

DWP had had experiences with some projects described as ‘agile’, but which weren’t. They were, understandably, a little wary. We proved our worth with an alpha, which took a specific user journey through from start to finish. It could be used by a small group, and provided insight into the entire claim from start to finish. GDS collaborated with DWP digital services folk and the Carer’s Allowance operational staff, iterating every week. Inside seven weeks we had a properly coded prototype.

They're making decisions with data. They're keen to build up a portfolio of user research and user statistics. The more data they have, the better they get at making decisions. Gone are the days of writing a user response report at the end of a project. Now they start with user research and design to meet user needs. The team has starting building close relationships with groups of users, inviting them in regularly to try out new ideas and give honest feedback about them.

They now release code on a two-week cycle, rapidly iterating on what came before. Many changes, little and often. Compare this to how they used to do things: release a product, and leave it for five years unchanged and unimproved. That’s not how government does things any more.

Another thing: the team is now making use of cloud-based infrastructure and services. That’s not unusual, not in the commercial world anyway, but in government it’s considered innovative, even radical. The team joked about showing this stuff to colleagues from other government departments, who were so struck by it that they came up with the phrase “innovate with infrastructure.” I like that. That’s exactly what’s being done.

Each of these might sound like a small thing, but they add up, and the cumulative effect is visible in the public beta.

I admire the Preston team for the work they've done so far. The DWP’s Digital Leader Kevin Cunnington has some great people working on this and other projects (and has been busy recruiting more).

There’s lots more work to be done, and the team are looking forwards with an ambitious to-do list. It's a very long list, and it's going to need a lot of hard work. I have every confidence that they'll be successful and end up with a truly transformed service, something designed to meet the needs of the people who use it. Something that delivers.