This is one part of “A GDS story”. Please read the introduction and the blog post that explains this project.

A collaborative team of people from DVLA, DVSA and GDS worked together to map out driving services, in order to understand them better:

Having a map of how the service currently works, helps to inform how that service should be designed. It can tell us which services we should work on, how to work on those services and who with. The map also identifies where patterns and standards can be used in driving services.

Being bold means bringing your whole self to the situation and engaging fully with it. It involves openness, optimism and a commitment to something bigger than yourself.

On the same day, the Government as a Platform team began a 4-week discovery exploring live web chat support for government services.

GDS hosted Sprint 16. The theme was “Transforming government together.” Stephen Foreshew-Cain told civil service colleagues: "We've got your back."

The changes I’m asking us all to make are big, exciting, and challenging; we all need to be bold to make it happen. To do that, people on the frontline need to know the centre will back them up, and will give them the tools they need to do the right thing for their users. We will.

Principles for Government as a Platform products published.

Stephen Foreshew-Cain made a public commitment to gender diversity:

To get a large and complex programme like GOV.UK Verify to work, I think the main task is to manage energy and attention and point them in the right direction and minimise wasted effort. To do that, there are 3 sets of things we need to understand and respond to: goals, people and cycles (inside and outside our team). All these things change over time and they each influence the other more or less at any given time.

On the same day, Ade Adewunmi wrote about the creation of the Register Design Authority:

This team has domain control for the register.gov.uk domain. It will work with the register custodians who are responsible for running registers and are the domain experts, to ensure that the data in their registers is modelled in ways that meet users’ needs, and work with other registers in the government data ecosystem.

User researcher Will Myddleton wrote about civil servants as users:

Platform as a Service moved from alpha to beta.

Dean Lancaster and Arthi Viswanath from the recruitment team explained how they used their wall to manage the process:

We wanted something that gives us a bird's-eye view of our recruitment pipeline and there's nothing like a Spider chart to help do this. We’re able to see everything that’s going on in our pipeline and pick out what we want to talk about with our hiring communities. The board helps us plan and manage our day to day workload more effectively, and it also raises the visibility of our work. Making things open makes them better, and we’re happy that people can see what we’re working on and when we’re doing it.

Stephen Foreshew-Cain outlined his vision for a more collaborative future:

…we learned that in order to make this big change – to transform the relationship between citizen and state - we need to collaborate. Everyone in government needs to work together. Government has been ruled by silos for too long. Not just organisational silos, not even just technical ones, but silos of knowledge and experience that make service delivery more difficult than it should be.

Users need to know if the information they've inserted is incorrect. We've included clearly worded descriptive error messages. This helps put the user at ease as they know what they need to fix to continue with their payment.

It doesn’t matter what government looks like in 2030; what matters is how dynamic and responsive it is. Not the what we do, but how we do it. So, the biggest problem we face is reshaping ourselves so that we’re better placed to change as rapidly as the world around us.

On the same day, the web chat project moved into alpha.

GDS hosted the first govblogcamp event, encouraging and inspiring bloggers and blog editors across government to get together and share experiences.

A blog post about work to make it easier for civil servants to learn.

In a blog post, the recently appointed Head of Accessibility Alistair Duggin wrote:

Our goal is to make our services as accessible as possible; to exclude no one. We do this by trying to make sure that there aren’t any barriers that make it impossible or difficult for anyone to use them. We want our services to be easy to use by everyone.

It’s taken a huge amount of work from a lot of people to get here (thank you, everyone!), but live is really just the starting line. We’ve got a huge range of work on the go to iterate and improve the service, and we’ll carry on working as hard as ever once we’re live to make the service as simple and straightforward as possible for users. Watch this space - we’ll carry on updating you about our progress as we go along.

The GDS creative team made a poster to help newcomers settle in. We made a version people could download and print for themselves, and it ended up on walls in many other government departments and agencies (and in many non-government organisations too).

People who were naturally more confident and more assertive thrived, but people who prefer to take time and collaborate could be left out. The Women’s group was formed as a direct response to this, and its aim from the start was to make GDS a more inclusive place to work. We’ve been empowered by our senior team and by the whole organisation to make recommendations for change, and we’ve always been listened to and strongly supported.

The GOV.UK roadmap for 2016 to 2017 was published in public on ProductPlan.

Head of Design Louise Downe was named one of the UK's top 50 creative leaders by Creative Review magazine.

Transformation means understanding what your people are capable of, the skills they have, and how to best put them to good use. It’s about trust, and giving your team a mandate to do what they think is right. If you foster the right environment of creativity, of trust, of empowerment, you get better results from your team. And the team, as we’ve been saying for years now, is the unit of delivery.

Stephen Foreshew-Cain set out his vision for GDS:

The world around us is digital, whether we like it or not. Government must learn how to be digital too. GDS exists to make it easy for government to do that.

Chair of the Naming and Approvals Committee Evans Bissessar wrote up his work to audit and manage government domains, which resulted in closing down 947 redundant or unused websites/domains.

On the same day, the UK topped the United Nations e-government survey 2016, which said:

The United Kingdom’s engagement strategy has focused on maximizing openness and transparency in information provision in general, and especially in relation to policy formulation. Virtually all policy documents proposed by the government are published on GOV.UK.

The GOV.UK team decided to phase out use of “i.e.” and “e.g.” to make the site more accessible for everyone. Persis Howe explained:

We promote the use of plain English on GOV.UK. We advocate simple, clear language. Terms like eg, ie and etc, while common, make reading difficult for some ... So we’re phasing them out.

In order to create great services in the first place, government has to stop thinking in silos. It needs to create services that cross departmental boundaries.

Over 70 service teams across central government have already contacted us to say they’d like to use GOV.UK Notify to talk to their users. This is a testament to the value and viability of shared components both for the people who receive the messages, and the service teams that use Notify to send them.

Stephen Foreshew-Cain left GDS, and was replaced by Kevin Cunnington as Director General.

Doing 100 rounds of usability testing means that we have a really detailed understanding of our user needs, and a lot of insight into what works and what doesn’t work in terms of designing the GOV.UK Verify journey.

The GOV.UK Verify team published notes about its plans for improving demographic coverage over time.

On the same day, GDS published the updated Technology Code of Practice.

Digital Engagement Lead Lucy Denton wrote about forcing teams to rethink what they do in the briefest way possible: so that it could fit in a tweet.

Compressing your thoughts and ideas into 140 characters takes quite some consideration. What matters most to your readers? Brevity wins over excess; and hashtags and carefully chosen words can speak volumes in terms of tone and impact.

The territory register went into alpha.

Susana Berlevy explained the work of the Digital, Data and Technology Profession:

A digital career in government is one of the most exciting things you can do. We're no longer stuck in the past - we're able to build teams in a modern, flexible way. My team’s job is to make this the norm for all digital professionals across government. No matter which department they start their career, and no matter what moves they subsequently make from one department to another, and from one role to the next.

In collaboration with the Accessibility team at GDS, Karwai Pun from Home Office Digital created a series of posters about Dos and don’ts for designing for accessibility.

On the same day, Till Wirth and Sara Bowley wrote about GOV.UK Pay taking its first live payment from a user.

The Supplier Standard describes our expectations of, and commitments to, the technology companies we will need to work with us to make this a success. It introduces 6 shared principles, which support the best behaviours we have seen from suppliers and buyers.

Using GOV.UK Notify made sense. One of our aims at Digital Marketplace is to enable end-to-end buying that’s as frictionless for users as possible. GOV.UK Notify makes it easier for the Digital Marketplace team to send information to suppliers about a specific application process, as well as for suppliers to keep track of their application status.

19 local authorities signed up to take part in #VerifyLocal.

Launch of the GOV.UK frontend alpha.

The local authorities in England register moved to beta.

Kevin Cunnington hosted the 4th Transforming Together event, and explained his vision for GDS:

GDS is here to help departments transform the relationship between the citizen and the state. And to do this, we will support, enable and assure departments as they deliver their digital transformations. We’re here to listen to them, to help them do the right work, and be confident that it’s being done in the most efficient and effective way.

In the last few months, the total spend through the Digital Marketplace has exceeded £1.5 billion.

The webchat alpha team wrote about research on how users feel about webchat. 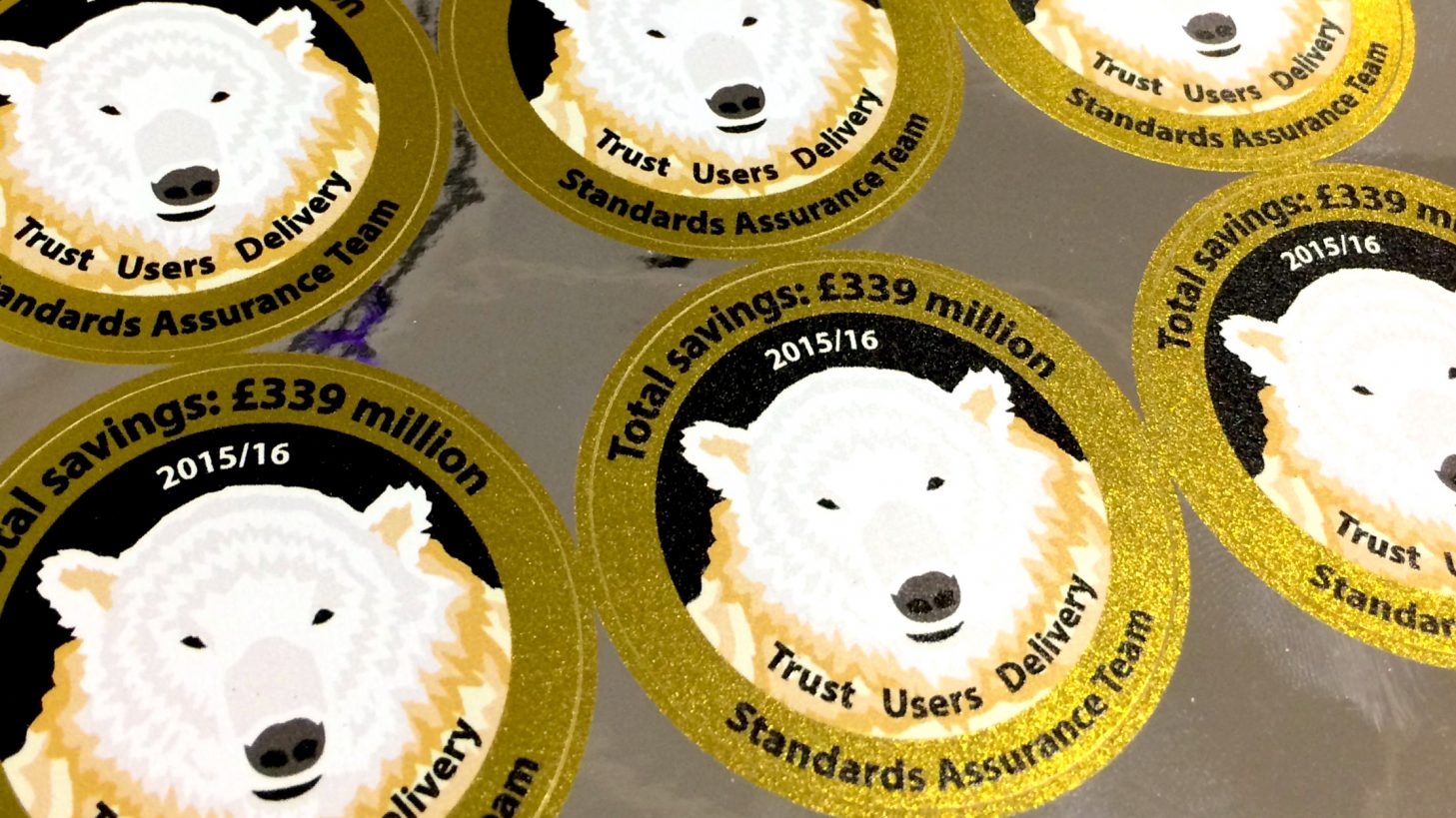 The Standards Assurance team helped make savings of £339 million for the 2015 to 2016 financial year across government. The team helps departments through digital service assessments and spending controls.

GDS turned 5 and we created the GDS Story as a means to tell our history and progress to date.

The latest iteration of the Service Manual was published. It helps people across government build services that meet the Digital Service Standard and prepare for service assessments.