Yesterday the BBC published data showing more people accessing iPlayer via tablet than via computer. This prompted me to update some of the data I gathered for the government's agreed approach to mobile last this time last year.

The objective of the UK government's digital strategy is to make sure our digital services that are so straightforward and convenient that all those who can use them will choose to do so. But what our users consider to be 'straightforward' and 'convenient' is not static. We need government services to be able to adapt quickly to big changes in people's behaviours and expectations.

For example, here's a graph showing how the devices people use to visit GOV.UK have changed since its launch. (To be precise, the data is for visits, rather than users.) 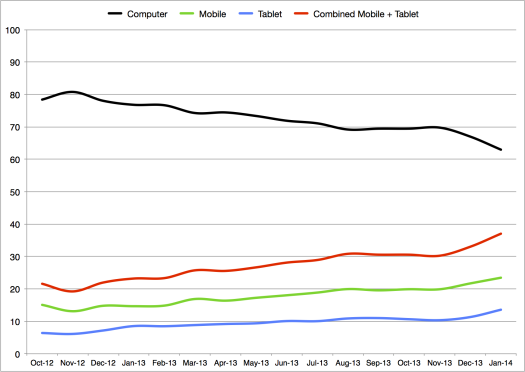 Percentages of visits to GOV.UK from computer, mobile and tablet

Compared with the general UK population, the graph above may be skewed by a minority (around  2%) of GOV.UK users who visit the site more than 100 times a month, often to research government activity as part of their job, typically from a work computer.

I've tried to get more representative UK data by looking at the visit data for the two weeks following Christmas Day, when such power users are probably not quite so busy.

The device breakdown for this period last year was 74% computer, 16% mobile and 10% tablet.

Shifts in the devices people use to access the internet should come as no surprise, but the pace of change might. And I do not expect this switch away from PCs towards more personal, portable, touchscreen devices to slow down anytime soon.

The UK government e-petitions service has seen incredible changes in how, when and where it is used. Pete Herlihy has product managed this service since it went live in summer 2011. As he revealed recently, only two years ago over 75% of visits came via computers. Now a mere 27% do so, with 56% from mobile, and 17% from tablet.

Not every service will end up with such proportions, but e-petitions demonstrates just how rapidly and radically user behaviour can change. Here's current data for some of the transactional services on GOV.UK:

Apply for a Student Finance:

Make a Lasting Power of Attorney:

I hope this helps explain why the digital by default service standard requires that, from April 2014 onwards, all new or redesigned central government digital services must be designed with an appropriate range of devices in mind. As we say in the GDS Design Principles, our services must understand the context in which people will use them. And for many people, for many services, that context is swiftly becoming more mobile, more personal and more touch-controlled.

Designing for small screens can be a real challenge. Which is why for many of the 25 exemplar services we're now designing the mobile version first, despite visits from computers still being in the majority. Why? Simply, it's often easier to make a service also work for a computer monitor and keyboard if you've already made it work really well on a small touchscreen than it is to go the other way.

Moreover, as Andy Washington, MD of Expedia UK & Ireland, explained at a recent panel, designing within the constraints of a small touchscreen helps keep your underlying service as clear and as simple as it needs to be to serve all your users, including those who may be new to the internet, or find it a struggle.

Finally, to answer the question posed in the title to this post: When will more people visit GOV.UK using a mobile or tablet than a PC? On Christmas Day 2014, if not before.

NB I've seen no data over the past year to suggest the government's approach to downloadable apps should change. We're still not 'appy about them, and central government departments and agencies must seek an exemption before they start developing any.

Reaching all our users