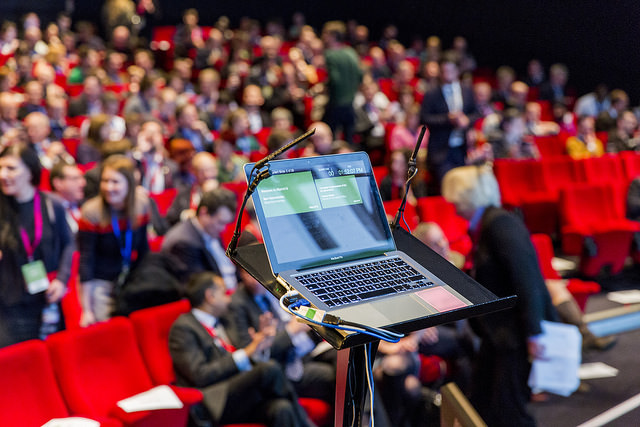 Just before he left GDS to go freelance, our friend Matt Sheret wrote a blog post about giving clear presentations. In it, he explained why our slides are so simple.

In the comments beneath that post, someone asked about sharing the message of a talk with colleagues after the event.

I posted a reply, saying that in my opinion, the best way to share a talk after the event is to re-write it as a blog post.

In the last few weeks I’ve found myself coming back to that thought over and over again - so rather than leave it as a comment where it’s easily missed, I thought I’d write it up in more detail here.

Slides are for presenting, not for reading

The point Matt made in his post was that our slides are simple for a good reason: we want to encourage the audience to pay attention to the speaker, to listen to what they're saying out loud.

Slides are designed to be presented. They’re great for showing on a screen in front of an audience, but they're a poor tool for sharing long chunks of text in any other circumstances.

The best way to share text that you want people to read is to share it in a format that’s easy to read. A digital document is fine if you're just sending it to a few people, but if you want to send it to lots of people or publish it, the best way is to write a blog post.

That’s the best way to share slides after the event.

People who already do this well

There are many people who are very good at this, and I'm going to pick out 3 of them.

The first is Matt Webb (formerly of this parish), who writes up his talks with incredible grace and style. Here's just a few (he's done many more): Sci fi I like, Scope and Iterative Architecture.

Click through them and you can almost feel Matt's personality and gorgeous grin leaping out of your computer screen at you. If you've met him in person, you can hear his voice seeping from the pixels. Matt's written up those talks on the internet, but he's written them as if he's talking.

Maciej's talks are always funny and entertaining, but look at the way he writes them up. The most recent, The Website Obesity Crisis, is typical. At the very top of the page, he makes clear what the page is: "This is the text version of a talk I gave on October 29, 2015," he writes. After that, he tells you a story. The same story that he told on stage that day. He shows you the pictures that he showed then, and writes up what he said (not verbatim, you can check that by watching the video version, but near enough to make no difference). It’s text, but reading it feels like watching Maciej speak.

A third example: London-based designer and maker Alexandra Deschamps-Sonsino, who posts her talks online with an embedded slideshow and a transcript. Have a look at New Creatives and The End of Ignorance to see what I mean. Because they’re part of her blog, they feel like part of the ongoing narrative that her blog represents. Because of the way they’re presented, they read like little essays.

The point is they are very readable, in a way that simply sharing slides on their own, or slides with speaker notes as bullet points, would never be. Once again: it’s like Alex is in the room with you, talking you through her thoughts.

So if you want to share your talk after the event, don't put your slides online by themselves. Don't email your slides to people. Don't copy what you said out loud on to more slides, and send those.

Instead, do what Matt and Maciej and Alexandra do: write up your talk as an illustrated blog post. Write it like you're still talking. Then put it on the internet, so that everyone can hear you.

Join the conversation on Twitter, chat to Giles about all things presentations, and don't forget to sign up for email alerts.