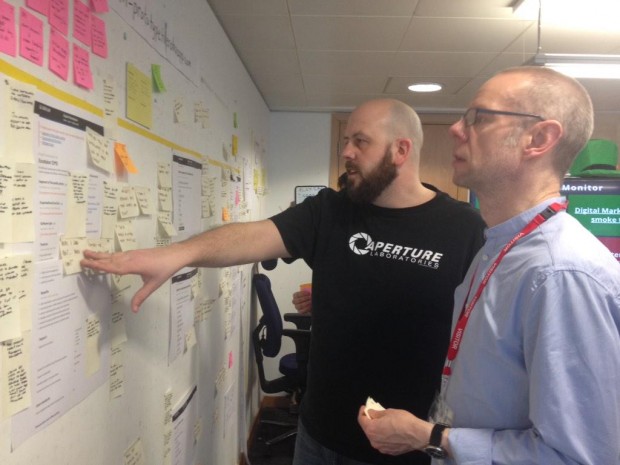 I'm Mark, and I'm a User Researcher at GDS. But I haven't always been.

After the financial crash of 2007/8 I lost my job in pension and investment sales so I needed to go and sign on at the Jobcentre. When I got there, an absolutely excellent adviser told me “you could work here, if you like …”.

A month later, I started as an adviser for long-term unemployed 18-24 year olds and I loved it straight away. Every day, I met loads of fascinating and witty people and I was often struck by the complexity of their lives. I don’t think I met a single person who didn’t want a job, but it was rarely that simple. Some of these people were genuinely disenfranchised and I heard a lot of harrowing stories.

Helping people to fill in repetitive and complex benefit renewal forms, and often being on the sharp end of their frustration, I spent a lot of time thinking about what the experience was like from a client’s perspective. There was the bi-weekly ritual of signing on, but I also thought about what their lives were like and how I could help them within the constraints of the benefits system. I was thinking in terms of user research but at the time I had no idea that this could be my job.

So I joined the Digital and Technology Fast Stream

I found out through a colleague that the Digital and Technology Fast Stream in the Civil Service was open for applications - I had to apply. I’ve always loved I.T. and digital work and I’d been heavily involved in these areas in my other jobs. The application process was thorough - it took nine months and I think I scraped through by the skin of my teeth.

Throughout the process, I heard a lot about GDS, GOV.UK, and agile ways of working so when I saw a chance to do a placement as a user researcher on the Digital Marketplace team at GDS, I leaped at it. I wanted to learn about agile in action, but most of all I really wanted to be involved in building something.

In my first two weeks, I found out that user research is the name given to everything I’d been thinking about when I was at the Jobcentre. More than that, it was the opportunity to learn how to crystalise these thoughts and really, properly, make things better for people. Even better, I found myself working with people who passionately (and vocally) felt the same way, delivered something all the time, learned from it and did it better again next time.

I wouldn’t be here without the fast stream, and when the opportunity arose to become a full-time user researcher at GDS, it took less time to think about it than it did to make a cup of tea. There was no way I could stop doing this.

I’ve been part of the Digital Marketplace team for more than a year now, and we know a great deal about our users, but there’s so much still to do. It’s our job to balance the complex process of buying things for the public sector while making it easier and safer for everyone involved. I’m confident in the team’s ability to meet the challenge and we’ve never wavered from two driving factors: put users first, and fail fast then fix it.

Utopia? No, of course not, there’s no such thing (the dishes don’t magically wash themselves in the morning, folks…). But the GDS team continues to inspire and intimidate me in equal measure. It’s a joy to be here.

Find out more about the Digital and Technology Fast Stream, the Civil Service's graduate recruitment programme which offers talented graduates an accelerated route to leadership within the Civil Service.