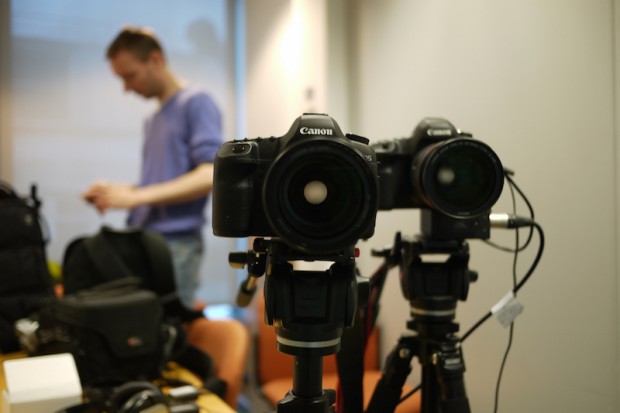 One question we've been asked a few times is: “What does your film production team look like? How can our department/agency/organisation build a team like that too?”

In the spirit of “publish, don’t send,” and since this isn't a topic covered by the Service Manual, this post explains how our team works at GDS. You might find the same approach works for you.

Filmmaking, like user research, is a team sport. We usually get a team together for each film, and we take a flexible approach to assigning tasks and roles, depending on what's required.

With a bit of juggling, it is possible for one person to do everything: setting up the camera, recording the audio, and conducting the interview. It's possible, but we don't recommend it - this approach is hard work for one individual, and you'll get much better results by spreading the load a bit further.

So at a minimum, we tend to assign two people to each film project: one to operate the camera/monitor the sound, and one to conduct the interview. They are the owners of that film project and will look after it from beginning to end. This works very well for the majority of films we make, which are usually talking-heads interviews with one, two or three people.

The camera operator is responsible for the recorded image. They need to make sure the subject is well framed, properly lit, and in focus. Lighting is a skill in itself, whether that means making use of available natural light or setting up specialist lighting equipment. Recording the sound properly means someone has to listen to it while the interview is taking place. We usually combine those three roles, so the camera operator is in charge of setting up lights and listens to the audio while watching the camera screen as well. It's quite demanding and requires a lot of concentration, but it works for us.

If you can separate out the technical roles of camera operator and sound recordist, you'll make life easier for both of them. That means they have fewer tasks to juggle at once. We don't do this for every shoot, but it's useful to have it as an option.

We’re lucky enough to have several people who can take on the role of editor. Like operating the camera, recording the sound, setting up the lights and designing motion graphics, editing footage is a skilled job that can take years to learn. Our camera people double as editors too, but that doesn’t mean you can’t separate the roles if you’re able to. One thing to consider is that editing is very time-consuming; if your camera operator and editor are one person, you’ll have to allow them enough time to edit each film they shoot.

We don't use motion graphics in all films, but we do in some, and one member of our team is a motion graphics designer. This is another job that's often a lot more complicated and time-consuming than people expect it to be. While it's not essential for all films, we think it helps to have access to someone with this skill - either as a member of the team, or as an occasional freelancer.

The interviewer poses questions, and has to listen carefully to the subject’s answers and respond appropriately. A good interview sounds like a conversation. The interviewer should prepare in advance by ensuring they understand what the finished film needs to say, and how they can guide the interviewee to say the most helpful things. Generally speaking, our interviewers double as writers for the rare occasions when we write a script or a storyboard.

The producer makes sure that everyone on the team:

Often, it’s useful for the producer to sit in during filming, keeping an eye and an ear open for problems that the interviewer and camera operator are too preoccupied to spot.

We've found that roles don’t necessarily equal individuals. Often, the individuals on a film production team will perform more than one role, and those roles vary from one film to the next.

Just as you'd expect with other multidisciplinary teams in government, the film team is flexible. Sometimes a film might only need input from two or three of us. At other times, all of us will chip in. It helps to have lots of people with a variety of skills, so they can swap roles when needed. Sometimes we do hire in extra help from a production company, and on those occasions juggle our roles and to-do lists to fill the gaps that the production company's team can't fill.

We usually go through rough cuts as a team as well, and use feedback from those sessions to make more polished edits.

Whatever works for you

This arrangement works well for us, but we're very aware that we still have a lot to learn from other teams elsewhere in government. So if you have tips or suggestions based on your own experience, please let us know or post your story in the comments below.