GOV.UK provides government with several ways to promote and support its marketing campaigns. I wanted to give you a bit of background on what the guidelines are, and how they’re being used.

Keep Calm And Carry On

Seventy years ago, the UK’s Ministry of Information produced this poster to be deployed in the event of an invasion. It resurfaced relatively recently when a bookseller found it in a pile of books, beginning its ascent into ubiquity (including GDS’s own tribute, below).

After the war, government departments continued to find new and varied ways in which to campaign, and sometimes to create changes in social behaviour. For example, the DfT’s THINK! campaign helped change attitudes to seatbelt safety and drink driving.

And although the government continues to use traditional media for its campaigning (it’s hard to move at the moment without seeing a twenty-foot high poster-people reminding you to fill in your tax return), it is also taking advantage of the possibilities of digital media.

Taking campaigns to where people already are

Just a glimpse at the digital engagement case studies featured on Helpful Technology will demonstrate the variety of digital campaigning and engagement approaches taken by government at national and local levels.

HMRC used Flickr to post mugshots of tax evaders. The Intellectual Property Office linked up with Dragon’s Den to talk about copyright issues. And the Driving Standards Agency (DSA) is running a cross-platform campaign on the Highway Code, generating more than 13,000 ‘likes’ on Facebook and 15,000 Twitter followers.

What do many of the most successful examples have in common?

Well, they’re using digital technology to take the campaigns out to where people already are - to Facebook, to Channel 4, to the NME website.

Often, this gives people more time and space to engage properly with an issue, on their own terms and in their own language, rather than expecting them to visit a government website.

So what’s the role of GOV.UK?

GOV.UK is - as you may have spotted - a fairly straightforward website. It aims to make it as easy as possible for people to access government services, and understand their rights and obligations.

So although this may not make GOV.UK the best place from which to try and change how people behave, it can however be useful if the campaign goal is to keep people clearly informed - for example, about government services or changes to the law.

We’re working with departments to make the most of this.

A good case in point is DWP’s Workplace Pensions campaign. You may have seen the TV adverts about it - the biggest change to pensions in a generation.

This is where we come in. We provide a campaign landing page, which can be promoted in the TV ads, and which uses the same images and messages. In time, we’ll also be promoting pages like this through the site’s navigation, while taking care not to interrupt any core user journeys. 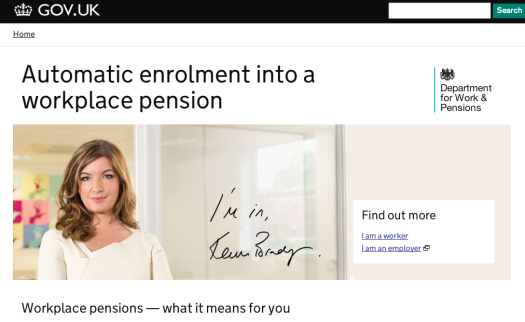 When we do this, we’ll also want to ensure our approach is working - so for every campaign page we host, we’ll measure and report on traffic. We’ll also provide space to host background material about the campaign in GOV.UK’s Inside Government section, and space for departments to communicate with stakeholders.

Finally, we’ve been working closely with the Cabinet Office’s Marketing and Advertising team to ensure that when government does deliver a digital campaign, it does so as efficiently as possible.

As part of this, we’ve just drawn up some more detailed guidance for government departments on the GOV.UK campaigns offer - civil servants can find this over on the Government Communications Network website (you’ll need to register to get access to the document).