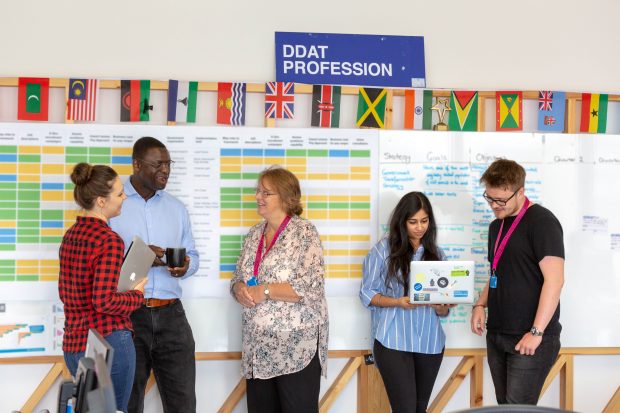 Over the past year, innovation has been a big area of focus for me, as it has been for the team here at GDS and for Minister for Implementation, Oliver Dowden.

Transformation cannot be achieved without innovation. As an organisation, we should look at how we can continue to transform government, by giving people the tools, structures and skills they need. We’ve done some great work so far: from the publication of the technology innovation in government survey to the delivery of the GovTech Catalyst programme.

While developing the strategy, we worked hard to ensure that the views of academics and technologists in the private sector and from across the public sector were addressed, particularly what they believed blocked innovation and what enabled it in government.

The strategy rightly identifies people as an enabler of innovation. This is something I’ve believed for a long time. It’s all too easy to think that developments in technology make people less important. With every year and every job I’ve had in digital, I become more and more convinced that the reverse is true. It’s people that make the greatest contribution when it comes to emerging technology in government.

As head of the Digital, Data and Technology (DDaT) profession, I’d like to share what the Government Technology Innovation Strategy means for our people.

In the 2017 Government Transformation Strategy, we set our ambition as ‘creating one of the most digitally skilled populations of civil servants in the world’.

We’ve made great progress, and this will undoubtedly support the work we do in the future with emerging technologies in government.

To begin, we created the DDaT Profession Capability Framework, which helps to improve recruitment by ensuring that there’s consistency in job roles.

Before, there were many job roles across government – many of which were identical but with a different label. This meant that it wasn’t easy to move jobs between departments and it was confusing for those who wanted to join government.

As part of building the digital and technology profession, we created a clear structure of job roles. We reclassified and reorganised job roles across departments into a new taxonomy of nearly 40 job roles.

This has been used to create consistency and alignment across departments.

This means a more visible route for career progression and a better grasp of the huge scale of job opportunities for specialists across government.

The DDaT Fast Stream programme and our apprenticeship schemes give people the opportunity to join the Civil Service in specialist roles. Last year, the programmes received 3,000 applications.

And, of course, the GDS Academy continues to go from strength to strength. We’ve trained 10,000 students, which is a fantastic achievement. The GDS Academy  provides in-house training to any public servant who wants to update their digital skills. We run courses on agile methodology for practitioners and policy makers.

To make sure these courses are available to anyone who needs them, we have created additional pop-up academies in Birmingham and Wales. We also helped Scotland set up its own digital academy.

We also work closely with colleagues in the Major Projects Leadership Academy to make digital a core part of their teaching as well.

The strategy sets the direction for how we will work to support our people.

The Data Science Partnership, lead by GDS and the Office for National Statistics (ONS) Data Science Campus is currently undertaking an audit to understand the current picture of data science capability across government. When the results of the audit are known, we will explore training opportunities for data specialists and those new to data.

We’ll also look to expand the courses available through the GDS Academy. We want to enable more secondments. We will develop a mechanism for seconding people from the tech sector into government and vice versa.

The strategy also outlines our continued commitment to working with academics through the Open Innovation Team (OIT).

We’ve identified that leaders need more support. We want leaders to fully understand what emerging technologies can do for their organisation and for citizens. We want them to feel empowered to take proportionate risk when it comes to experimenting with new technologies. We will focus our energies on understanding exactly how we can enable this.

The team at GDS (and those of you who attended the Sprint events we have held so far) know that my big ‘themes’ are: transformation, collaboration and innovation.

I’ve addressed transformation and innovation in this post. So in terms of collaboration: I hope that you’ll take the time to read the strategy, and to take a look at the AI guide published alongside it, which is designed to help public servants in government realise the potential of artificial intelligence. I hope (if you haven’t done already) that you’ll join one of the GDS Academy courses. And I hope that this strategy will help us all work together to build a government that is truly innovative.