In November, Sarah Foster and Jasper Pandza from the Department for Digital, Culture Media and Sport (DCMS) got in touch with GDS to find out about the work it does with Codebar, a non-profit organisation that runs coding workshops for under-represented people in tech. 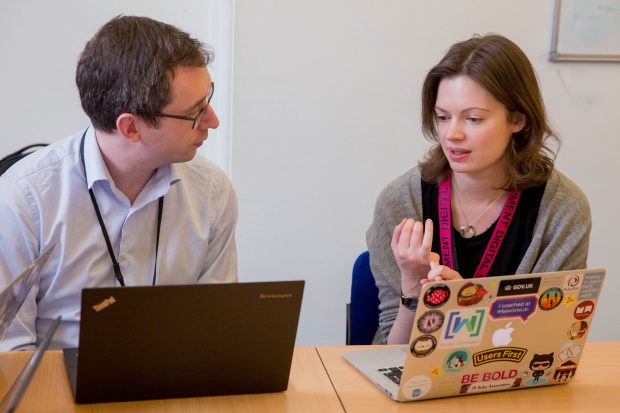 We met to have a chat. DCMS wanted to run something similar – informal meet-ups for colleagues who were interested in learning to code.

As you would expect from the lead government department for digital policy, there was strong interest in learning to code at DCMS, especially among leaders and policy officials.

It soon became clear that there was an opportunity for the GDS technology community to provide support to DCMS colleagues to help them develop their coding skills.

A weekly lunchtime coding club was suggested. DCMS colleagues would attend and GDS developers would provide support and guidance.

Bringing the Coding Club to life

DCMS colleagues wanted to learn Python as well as HTML and CSS. I asked the GDS technology community for volunteers to go to DCMS one lunchtime a week for a 4-week trial to help out at the coding club. 9 developers came forward.

We decided to offer 2 coding club sessions a week: one on HTML and CSS and the other on Python.

We decided to keep the coding club sessions fairly informal so that we could cater to a range of skill levels. People who had never written a line of code before were just as welcome as those familiar with programming languages.

We knew that not everyone would be able to attend every session and we didn’t want anyone to feel left behind if they couldn’t come one week.

Therefore, rather than delivering lectures which may not be suitable for everyone, we invited attendees to either bring along a project they wanted to work on or follow one of the many free tutorials available online, such as 'Automate the boring stuff with Python'. With this approach, attendees could work at their own pace, carry on in their spare time if they wanted to and pick up where they left off if they missed a week.

After the 4-week trial concluded, we held a retrospective for DCMS coding club attendees and GDS volunteers to evaluate the sessions.

Both attendees and volunteers enjoyed the sessions. Attendees were grateful that they could work at their own pace and liked meeting colleagues from another department. They also said they had already made progress and were keen to continue learning.

In the future, we’d like to explore grouping attendees by experience level so that we can better tailor sessions to different needs. This approach would also enable attendees to collaborate in groups and help each other out, so that the coding club can be more self-sufficient. It also became clear that attendees valued the idea of building something rather than just following tutorials, so GDS will help to compile a list of beginner-level projects to get started with.

Do you run something similar in your department? Comment below.

Emma Beynon is a GOV.UK developer.

We’re hiring! Come and chat to us at Silicon Milkroundabout on 19 and 20 May and follow @DigiCareersGov.

Check out what type of software developer roles exist in government.