The US government runs an International Visitors Leadership Program, which brings together future leaders from around the world. It’s had over 350 current and former heads of state attend, as well as 45 Nobel laureates.

Each visit is themed, and the most recent one was for future digital and technology leaders. As one of the organisations playing a leading role in digital government around the world, GDS was invited to take part. So 2 of us joined a group of 21 people from 13 countries on a tour across the US. We visited Washington, DC; Detroit, Michigan; Columbus, Ohio; and San Francisco, California.

We wanted to share what we learnt while we were there.

1. GDS is making a difference

What we’ve delivered and published at GDS has had a big impact. People, including the State Chief Information Officer of Ohio, told us that their organisations have changed as a result of the blog posts and guidance we’ve published.

The Digital Service Standard is credited as inspiring the US approach to digital, as set out in the US Digital Playbook. GOV.UK design patterns are obvious across federal, state and county websites, and the guidance on native mobile apps seems to have been one of the most appreciated things we’ve done.

The US government system is federal and decentralised. We were introduced to the 3 main arms of federal digital capability and their respective areas of expertise or, as they’re known at 18F, their ‘superpowers’. There was a consensus that this ‘division of powers’ approach was well-suited to the US context and its benefits outweigh any downsides of potential duplication of effort.

The Presidential Innovation Fellows are the catalysers: working alone in agencies and departments for a year, identifying digital opportunities and prototyping.

18F is an in-house digital delivery agency funded by departments to work on specific projects. It often builds on the ideas introduced by the Innovation Fellows, and builds digital capability across government. It has the feel of the UK’s Transformation Programme.

The US Digital Service is the policy arm of digital delivery. It’s focused on ensuring that there isn’t another Healthcare.gov-style technology disaster that undermines policy priorities. And they have a direct phone line to the President. 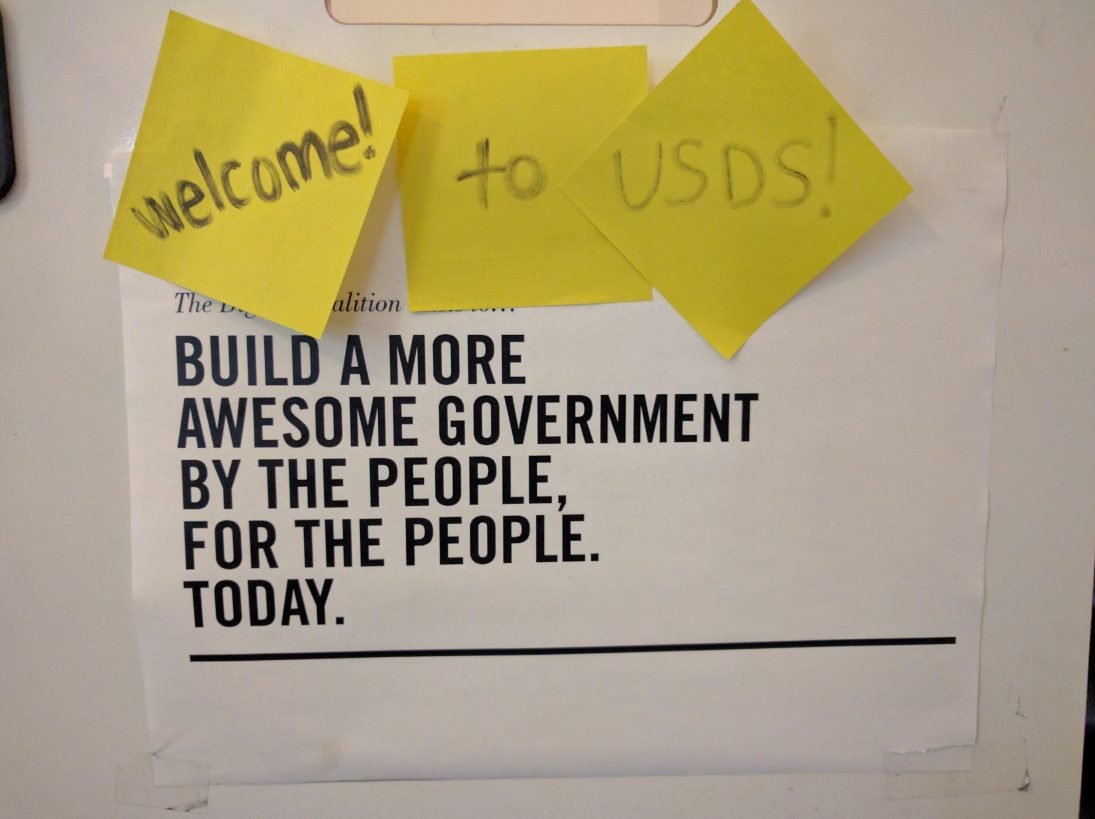 3. The US public service is attracting diverse talent

The US public service has done an excellent job of attracting top talent into government. Of the people we met, a huge number are incredibly talented women. These include the US Chief Technology Officer and her deputy, the 18F Deputy Executive Director and the Code for America Director.

At the main Code for America summit session, there were 23 speakers on the main stage. Of these, 17 were women. We asked Maryann Kongovi, the Code for America Chief Operating Officer, how they’d done that. She said they were the best people.

4. We need to learn from each other

We need to keep ourselves open to learning from other countries. If you’re trying to solve a problem, it’s likely someone else has already done it.

The UK is currently number 1 in the UN e-government index. We need to be at the leading edge of change to stay there. For example, we should learn from the Kenyan model of innovation in the money transfer and financial services market. They skipped the step of requiring bank accounts and moved directly to mobile payments. We should learn from the Estonian model of e-Residency, which addresses the needs of an increasingly mobile business market.

Our US hosts acknowledged the inspiration they’ve drawn from GDS. But it’s important that we’re just as committed to learning lessons from other countries that can help us serve our users better.

Specific examples where this kind of learning is already happening include cloud.gov and Government Platform as a Service (PaaS). The GDS PaaS team decided to use the cloud.gov documents as the basis for its own technical documents, building on the work the US had already done. We need to find ways to do more of this, not just between the UK and the US, but with other countries that are leading the way on different aspects of digital transformation in government.

5. We should look for new ways to solve government problems

We met Jerry Paffendorf, founder of Loveland Technologies. He’s been working with the Detroit city government to map plots of land, helping to target blight demolition initiatives more effectively, and supporting people at risk of foreclosure as a result of tax arrears.

From New Zealand we heard about the R9 Accelerator, an initiative to involve aspiring entrepreneurs in a 3-month long discovery and alpha-like exercise alongside existing civil servants. In a twist on traditional procurement, the programme lists ‘Opportunities’ for innovators to work on.

These are just a couple of examples of how other countries are experimenting with using new thinking to solve problems.

One of the many inspiring talks at the Code for America summit was by Jenny Lay-Flurrie, Microsoft’s Chief Accessibility Officer. She said that to get accessibility right, we need to be committed to hiring people with disabilities. They need to be involved in building software that will meet the needs of people like them. She showed a video demonstrating Microsoft’s commitment to this principle.

Jenny’s advice is a variation on a theme that we often return to. As government, we are building services that need to work for everyone, so it’s especially important that we have a diverse workforce. People delivering public services don’t just need to understand diverse needs in an abstract sense, they need to live those needs in a very personal way. A specific demonstration of this general principle is putting users of accessible software at the heart of building accessible software.

7. Good processes and services should be shared, so others can use them

We heard about central federal government teams working on software that individual states or local areas can use to deliver local government services. One example is the Presidential Innovation Fellows’ work to develop a way for parents to apply for free school meals. Another example is a prototype service developed by the US Digital Service. It shows how local governments’ separate benefits application processes can be unified with users at their heart. You can watch the Code for America presentation on that initiative.

This takes the way we’ve been thinking about Government as a Platform one step further, to think not just about components, but to include whole services, which require minimal customisation. It’s not an area that we’re currently exploring, but it certainly offers food for thought.

Thank you to the people who helped make this trip happen, and everyone who was so generous with their time. We especially want to thank the US State Department and the International Visitors Leadership Program, the White House Office of Science and Technology Policy and the US Digital Service. And, of course, all of our fellow attendees!