Today we have a guest post from GDS alumni. Previously part of the GDS transformation programme, Natalie Taylor now works at London’s City Hall as Senior Manager for Digital Transformation. Here she tells us about how she took her GDS experience and put it to work to improve the Mayor of London and London Assembly website.

After leaving the GDS transformation team last year, I joined London's City Hall, where for the past year I have been responsible for digital, design, and marketing.

Before joining I was briefed that the existing website for the Mayor of London and the London Assembly was old, the user experience wasn’t great, the design was very outdated, and the search didn't work properly. Both staff and users really struggled with its limitations and the time had come to build a new one. The digital team had finished work on an alpha and were just starting on the beta. I was told that they wanted to follow the Digital by Default Service Manual; so I was looking forward to working with like-minded people who understood the way I was used to working.

When I arrived, it wasn't exactly what I had expected. We had a great team of developers on board and the work was being done in three weekly sprints, but with all of the testing happening at the end, so more time boxed 'waterfall,’ than agile.

I was pleased to see that some good research had been done at the start, to understand what users needed from the site, but I was also concerned that no further research was planned or budgeted for.

There were daily 'stand-ups' happening every morning, but they were actually conference calls, with everyone dialling in from their desks and there were no walls( in the office or electronically) to manage the progress of work.

At GDS I’d worked on 3 of the exemplars, I was used to a challenge and was looking forward to getting started.

The team at City Hall and the selected suppliers were also keen to learn and work together to make things better for the user. In my opinion, if you have good people, with the right attitude, then that's half the battle won. One of my personal challenges was to gently introduce some new ways of working without upsetting the apple cart or slowing down delivery.

I started by making the case for budget to carry out more user research.I knew that getting regular feedback on the product from our users, would be crucial to delivering a decent website. Fortunately the senior team agreed and soon we were working with the Web Usability Partnership and GDS to schedule in regular sessions at the lab in Aviation House.

The next thing we did was to have actual daily stand-ups, by a board with all of the stories written on cards in swim lanes. Our developers are based in Manchester, so we had to dial them in on a conference phone, but this set-up was still a massive improvement.

When I emailed the facilities team to ask for white board space on the walls in the office, I think they thought I was barking. City Hall is a very smart building, open to the public and understandably they want to keep it clean and smart, but over time, our Head of Information Technology, David Munn, has managed to persuade them that we need walls. We now have a very smart class board on the office wall, which proves that agile doesn't have to mean messy! 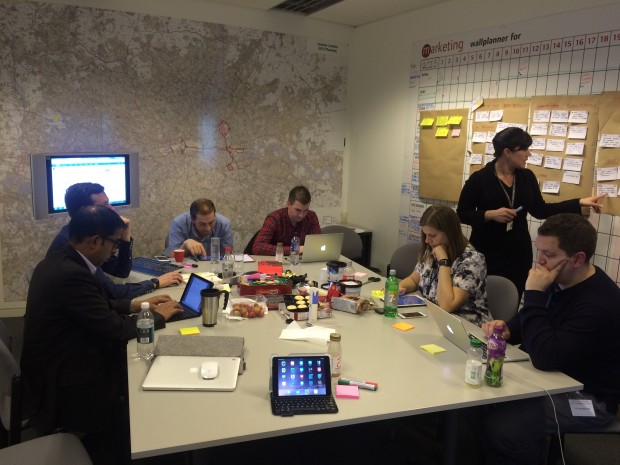 One thing we haven't had to change at all is our fabulous team of Content Designers, who had the task of trying to reduce website content by 75% and turn it into compelling, multimedia content, written in plain English. City Hall is much like central Government, just on a smaller scale; so we have lots of different departments to work with, most of whom have different needs, different audiences and different stakeholders and that's just the policy teams. There's also the London Assembly as one organisation and as individual Assembly Members, the Mayoral team, events and City Hall as a venue, to mention just a few. Quite how they've managed to achieve this as a content team of just 4 still baffles me.

We are now doing continuous development and testing, supported by our supplier. Our current model of working feels much more efficient and collaborative than it did twelve months ago. This has been achieved thanks to immense trust from the Senior Management Team, who were prepared to not only let us try something new, but also leave us alone to get on with it and support us when we needed help.

Another important ingredient to our success is the relationship between the digital team, who are part of the External Affairs directorate and the IT department, who, fortunately for us, were already interested in using agile when I joined and are also very firm supporters of the Digital Services Framework.

We launched the beta site to the public in July this year. Between July and November 39,000 users visited the site. So far the user journeys are looking much more successful than the old site and the feedback we're getting is that users like the design, usability and are pleasantly surprised to find information that is genuinely interesting to them. We switched off the old site and replaced it with the new one on 27 November, confident in the knowledge that because it had been built using the GDS design principles, it would be a massive improvement on the old one.

Now the new website is live, we can breathe a sigh of relief and rest on our laurels … well, maybe for a weekend, but not much longer. There is still plenty to be done. For go-live we were focused on delivering the minimum viable product, but there are plenty of improvements and additions to come, so 2016 will continue to be busy.

Personally I am looking forward to doing more work with my colleagues across City Hall to look at how using digital products more widely when developing policy and strategy can help us to engage better with Londoners.