Agile isn’t something you do, it’s something you are. It’s a broad church. This means that there’s a variety of processes and cloud based tools being tried out by groups across the country.

As an example of an agile process I use, I’ve found that it’s worth sketching out a lightweight map of how your team is working. This shouldn’t be a difficult task. If it is, that may indicate that the process could be improved or is not well understood by the whole team.

Putting the post-it notes to use

I recently worked with the Personal Independence Payments (PIP) team in DWP to map how the team showed their work process. We used post-it notes on a whiteboard. In the picture below, a pink post-it note is a meeting, yellow is a quality gate, green is information stored online and orange is information on a physical board in the team area. 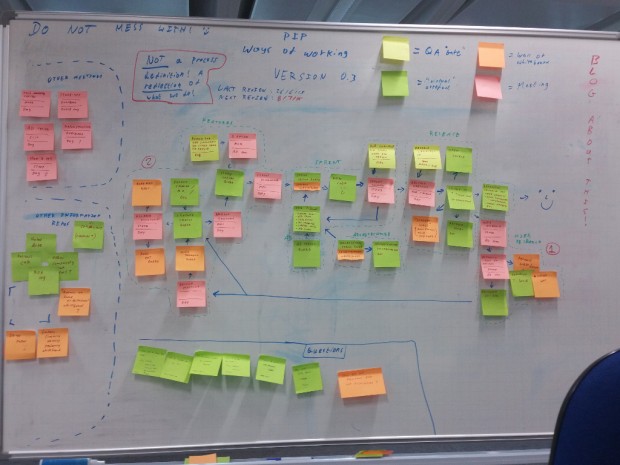 Why documenting work was useful

The PIP team found this way of documenting their work useful for a number of reasons. It helped confirm that everyone on the team understood how all the different parts of the group do their work. This is especially helpful for those people who are new to the team.

Showing the benefits of working in multidisciplinary teams, the user stories put together by the PIP team’s business analysts were influenced by insights from user research sessions. Mapping the workflow like this was also useful for indicating how the team tracks technical stories (or “chores”): things like setting up a database. It also allows the team to start discussions about how to integrate the Assisted Digital work with what the rest of the team was doing.

Working in the open like this highlighted how the three amigos sessions between the business analysts, the technologists and the product owner really drove the whole process as well as what steps were needed to release the software. Finally, the map made an interesting talking point for discussions with stakeholders after show and tells.

Mapping out a process of working provided a starting point, something for the team to work to and reflect upon over time ... It helped the team to continuously improve, providing a physical representation of how the team worked that could be inspected and adapted.