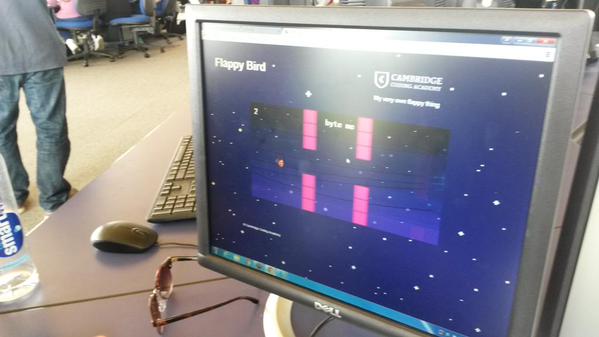 Last month I was invited to give a talk as at the Cambridge University Computer Science lab.

In partnership with the Cambridge Coding Academy, they were running a summer school for teenage girls to encourage them to study science, technology, engineering, and mathematic (STEM) subjects and to teach them about coding. Eighty 15-19 year old girls spent a week getting their first taste of HTML, CSS, Javascript and how the web works. They had little to no coding experience but an academic track record that makes STEM study a possibility.

From the code to the screen

For most of the day they were following a tutorial to build a flappy bird game, and were given the opportunity to customise it themselves - that was a great idea. Some of the girls created a Wonderwoman vs. James Bond version, others replaced the bird with Channing Tatum’s or Selena Gomez's head and an R.Kelly song would play once you reached a certain level. On top of being fun, this really helped them experience the satisfaction coders get from getting their idea to the screen.

They also had a daily talk from developers, to give them a sense of what it's really like. I gave them a presentation on what GDS is, what we have achieved, but also what the day of a developer looks like, including pair programming and retrospectives.

Find things out for yourself

Having only learned to code a year ago myself, I highlighted how it was very different from learning at school. Learning to code is not about remembering facts, but about building things. And it's perfectly acceptable to look up all the knowledge you need online. In fact, part of becoming a developer is becoming efficient at finding things out for yourself. It’s also about asking the right questions, like when there is a bug: could it come from the code I wrote? Which line? What things should I check to find out? What do I need to research to fix it?

The last part of my talk gave them ideas to keep on coding after the course was over. I introduced them to APIs, and gave them ideas of applications they could build using them. For example, an app that texts you when brands you’re interested in tweet about a sale (using the Twilio and Twitter API) or a travel website that allows you to pick your destination according to the average temperature and humidity level (using the Kayak APIs and a Weather API). The power of APIs is inspiring.

I also encouraged them to seek support after the course, as working with other people is much easier, and coding can be very sociable. I suggested they stay in touch with each other and meet up to keep coding together. I also suggested they go along to Codebar, a weekly meet up where professional developers coach students from minorities underrepresented in technology. I attended Codebar as a student myself, and found it so useful having a knowledgeable person to answer my questions.

The Wise UK Statistics show that the proportion of girls picking information and communication technologies drops from 50% to 36% between GCSE and A-level. It’s therefore a critical time in their lives to encourage them in that direction. This course was really well thought out, giving the students a glimpse into the type of job they could have and providing them with a lot of support. It also showed them how social coding can be, all the while giving them space to experiment and that's what coding is all about.