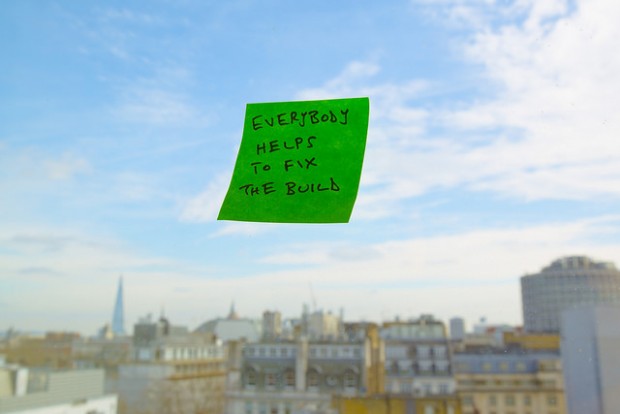 Part of building government as a platform is people.

We’ve talked a lot about how people in departments and GDS have worked together as part of transforming government. The last 4 years is testament to teamwork between a small, centrally funded digital centre and departments and agencies across central government - both the unsung heroines and heroes building services, and the high profile supporters of making government digital by default, like Mike Potter at HMRC and Tim Moss at Companies House.

One of the things I’m most proud of is that GDS has played a vital part in creating a digital and technology profession in the Civil Service - in departments but also, just as importantly, in agencies. We had many years of outsourcing, where we saw digital skills drain out of government. This led to a state of learned helplessness and reduced innovative thinking about the benefits digital could bring to government.

Forming GDS went some way to addressing that problem. But real change needs to be deeply embedded.

Yes, GDS is a centre of digital talent at the heart of government, but we’ve also taken the lead in bringing pivotal digital and technology professionals into the rest of government. Rebekah Ramsay and her team have done some great work in recruiting people right across the board.

They’ve been instrumental in hiring senior digital and technology talent from the private sector. That means that we’ve brought in people like Sarah Wilkinson, Home Office CTO and  Norman Driskell, Home Office CDO, from Credit Suisse and Razorfish respectively.

We hired Paul Shetler from Oracle, who went from being CDO at MoJ and then worked at GDS until going to Australia to be Chief Executive Officer of their Digital Transformation Office. We’ve also brought Mayank Prakash on board from Morgan Stanley, to be Director General Digital and Technology at DWP.

We played a part in hiring Darrell Midgley, CTO at the Department for Business Innovation and Skills (BIS), Tom Fitzpatrick, CTO at the Student Loans Company, Connall Bullock, CDO at the Cabinet Office, Phil Macpherson, CIO at the Valuation Office Agency and many more.

I’m personally committed to improving the technology and digital world’s track record when it comes to the roles held by women. Government should be leading the way on this. That’s not only because I think it’s the right thing to do, but also because diverse teams perform better. There is still much to be done, but it’s great to see that we’ve brought people like Jacqueline Steed (CDO at Student Loans Company), Heather Savory (Director General for Data Capability at Office for National Statistics) and Emma Stace (previously GDS, moving to BIS to be CDO/Group Digital Leader) into senior digital roles in government.

In total, we’ve appointed over 120 senior digital and technology professionals. We’ve also brought in 90 senior interims who have worked on digital transformation.

In the same way that GDS itself has benefited greatly from strong ministerial support, having senior staff in departments who really “get” digital means that the people on the front line know that they have the backing they need. Hire the head and the rest will follow.

That said, part of working in an agile way is knowing that good ideas don’t just percolate from the top down. They require clever, creative people at every level of the organisation. That’s why, beyond the senior hires, GDS has also been involved in hiring and training 172 service managers, who are already bringing their expertise to building services so good people prefer to use them. And we’re thinking about the future. We currently oversee 125 Digital and Technology fast streamers (we hired the most recent intake), and we designed the new 3-year programme which sees them working on digital projects in departments across government.

We’ve made a great start, but we are always looking for suitable candidates to fill senior roles as they come up. We advertise across a range of platforms and work closely with recruitment agencies to get the right fit.

As you can see, digital thinking is no longer a disruptive thing. It’s becoming part of the fabric of government. Through the services and platforms we build and, as vitally, through people.