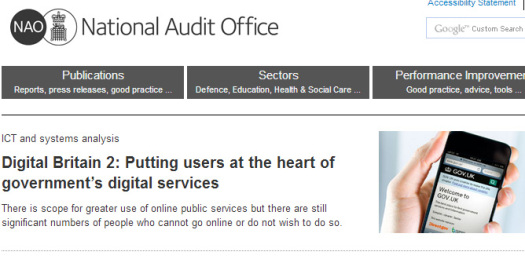 Today the National Audit Office (NAO) published their Digital Britain Two report, examining the government’s digital by default strategy. In particular, the report took a close look at the strategy document we published last November, and assessed whether the evidence stacked up for taking the direction we’ve chosen.

The NAO’s views on what we’ve done are important, because they are both independent of government and responsible for checking that it spends public money wisely. Their reports are often very influential. In 2011 they published the Digital Britain One report (PDF, 556kB), which recommended five lessons that informed the newly created Government Digital Service (GDS).

The report includes findings from a large piece of independent fieldwork that the NAO commissioned to find out more about the UK’s online preferences and capabilities. They surveyed over 3,000 people and 130 businesses, gathering a wealth of interesting data. Happily for us, many of the findings tally very closely with the Digital Landscape Review, a survey that we ran to provide the evidence base for the Government Digital Strategy.

There’s other good news in this report. The NAO praises GDS’ firm leadership of the agenda, and the ambition of government’s digital plans. They also emphasise throughout the report that there is plenty of scope for greater use of online public services, and that most people and SMEs support this intention.

There are also some recommendations for things that GDS could look to improve upon. Improving public awareness - both of the public services that are available online and how we plan to help those who are offline - is something we can work on. They also suggest that our plans on assisted digital should seek to make more of the help those offline get from friends, family and colleagues, and make sure those plans are communicated effectively.

Overall, this report is a really positive sign we’re moving in the right direction. But it’s also a helpful reminder of the work we still need to do to support those who are less able to use online services.