Just as there are trends in technology, there are fashions in project management and some feel that agile is poorly suited to government and is just a fad. One of the principle objectives for this project was to demonstrate that an agile approach can work. For us that meant delivering a prototype that:

I drew upon Scrum for a structure to manage the project but I knew not to over do it.  In my experience projects can quickly become about the process and not the product, with everyone getting hung up on big 'A' Agile.  I claim no particular expertise - I am a practitioner and you have to allow room for pragmatism.

Working iteratively, within an agreed upfront budget and time box allowed us to get a prototype out the door quickly.  In that time we were able to deliver two releases of the software before finally releasing to the public 3 days ago. We have been pretty open throughout the development and that has been useful for us as a team and hopefully for those people outside of the project room with an interest too.

This is my view of how things developed and some of the challenges we faced.

We spent the first two weeks in February recruiting a team from inside and outside of government, talking through the scope, agreeing some design rules and agreeing a vision for the Alphagov product based around the recommendations of Martha's report. 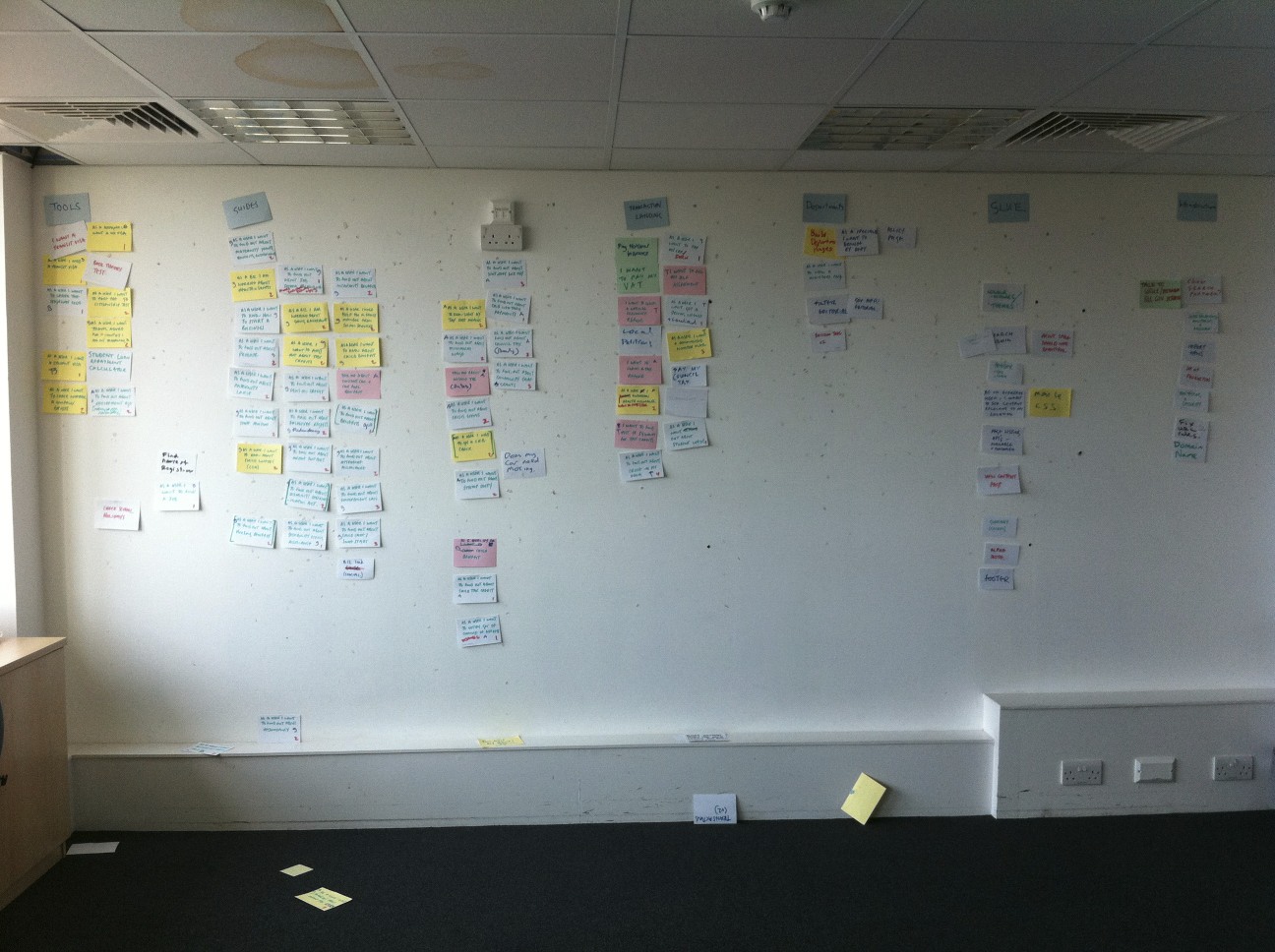 We ended those two weeks with a list of priortised user needs (based around search analytics from Directgov, Hitwise and departments), roughly grouped into functional areas and stuck to the wall. Each card (or user story) represented a user need, prioritised roughly from left to right and top to bottom. 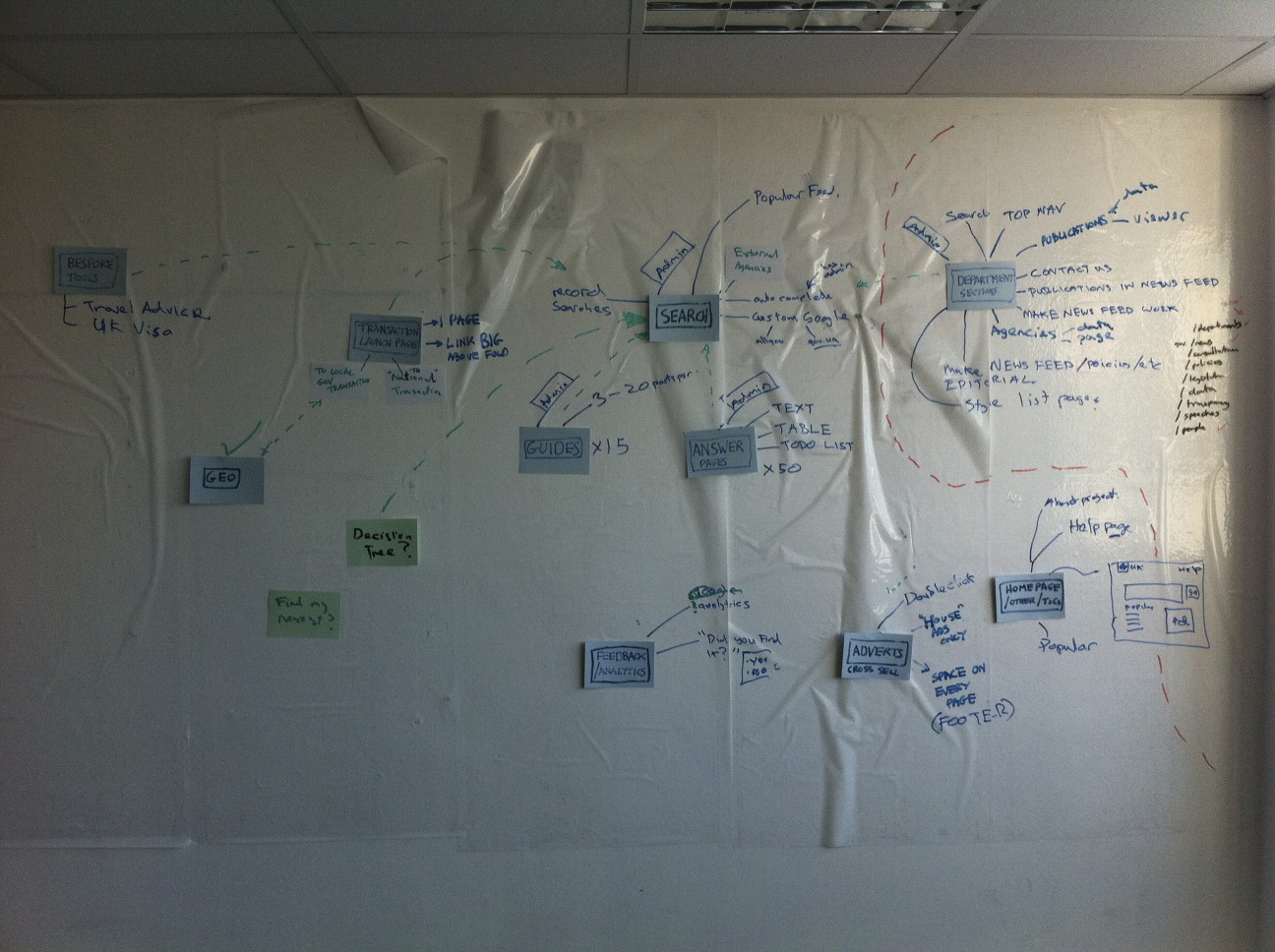 Crucially also there was a fair amount of @tomskitomski and @memespring's product experience. All this was more than good enough to get on with twelve weekly development sprints.

We kept the rhythm of the project with daily stand up meetings, weekly show and tells, and certainly in the early stage of the project we'd get our heads together to work out as a team what worked and what hadn't.

We talked a lot - regular interruptions across the room were accepted, sometimes there were creative tensions but crucially everyone worked alongside each other in the same room with a focus on delivering a product. 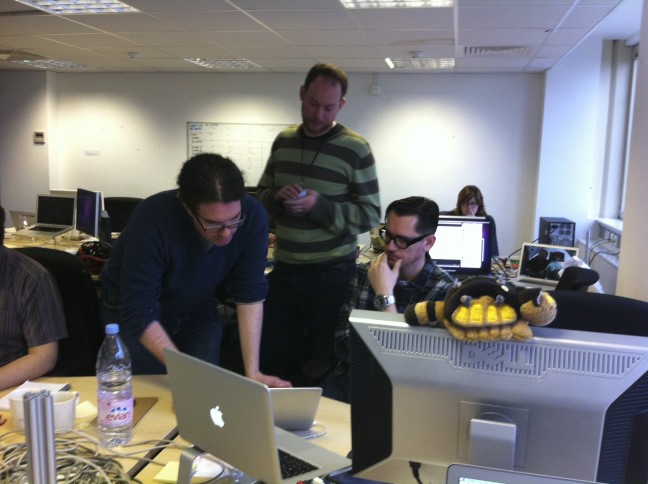 The product evolved as we moved through the weeks and our view of the product changed.  A language developed around 'glue', 'gov', 'tools' 'guides and answers'.  User stories cards became a mix of user needs and  placeholders for a bunch of tasks. 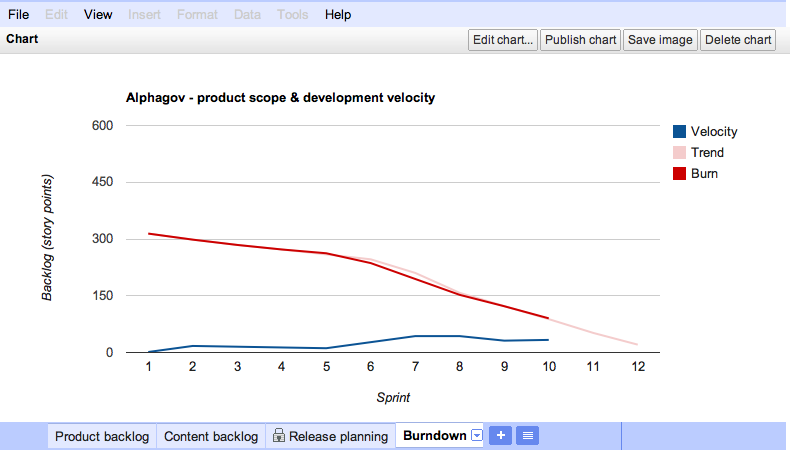 We used a backlog and estimated the size of each story card  to negotiate the weekly work loads. But the team did not get hung up on the concept of velocity (apart from @jamesweiner who thrived on story points and would try to game the system to deliver a 'winning' week). 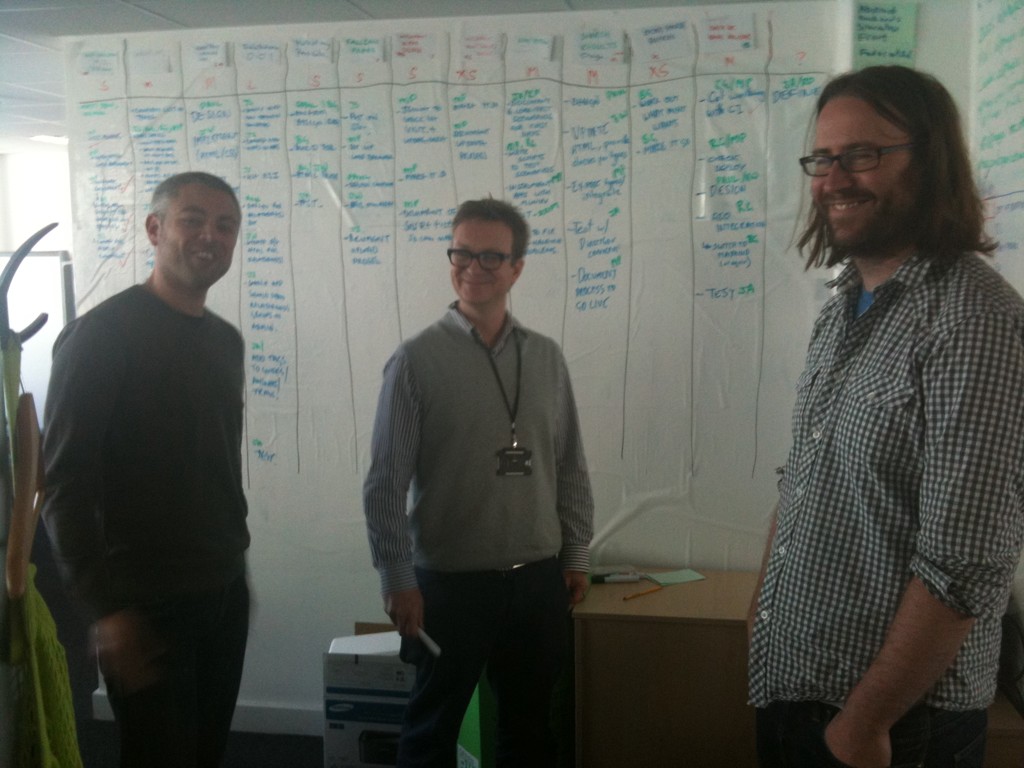 Mostly though we organised ourselves around what felt right.  In fact, for the last two weeks we relied totally on a list on the wall of 'things to do' - because it was the quickest and simplest way of polishing up what we'd already done.

We (or rather I) didn't get everything right. By the end of sprint 5 I was just about ready to hang up my Excel and opt for a life at the RSPCA.

One of the challenges was balancing momentum with getting the team together.  I started on the project in the last week of Jan, by Feb the 5th we had Richard on board along with Jimmy, Dave, Helen, and Peter.  It wasn't until mid-March that we had a full team in one place all of the time.  This was disruptive and made syncing design and development through iterations of development and working together that much harder.  In Sprint 5 we only delivered a couple of stories and Sprint 6 was equally tough but thanks to a monumental effort and some pragmatic concessions, we delivered.  From then on we properly started to fly.

Most of the Alphagov team are individually capable of designing and building digital products and despite everyone having a role with a title, the boundaries are difficult to establish in practice.  We knew who the drummer was, that be Russ, but everyone was capable of being the lead guitarist - so to speak.

Like every other project team it took us time to settle into each other but by working so closely in one room, with space to draw on the walls, with the minimum of interruptions and a single focus around product we were able to produce a lot in a short space of time.  We launched a day later than we announced, partly to do with the rhythm of comms, but happy to suck up an extra day to tweak and take the password off in good order.

The quality and amount of feedback and active debate on Twitter, Facebook and GetSatisfaction since then has been phenomenal.  We are responding to feedback and able to iterate the product day by day. That's got to be a more effective way of consulting with people to design products that help them deal with the Government online.

This project was not just about the team in the room. A tip of the hat to Chris Chant and Tony Singleton for taking a chance and giving us the space to do this, and to  Jimmy Leach, Neil Williams, Darren Leafe, Simon Everest, David Pullinger, Neil Franklin and many others in the Civil Service that helped make it possible.