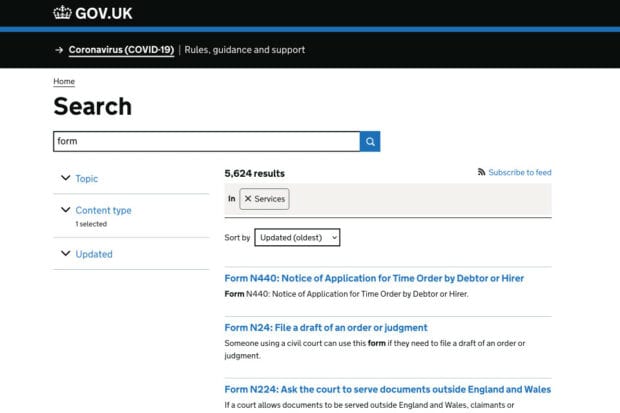 We want every form on GOV.UK to be accessible, easy to use and quick to process. To make this possible, we’re helping operations teams that run public-facing services with fewer than 10,000 transactions per year to quickly create affordable online forms using a common form-building platform for government.

What problems are we trying to solve?

The GDS strategy has set the ambition to tackle the long tail of inaccessible forms on GOV.UK. Almost all forms on GOV.UK solely use PDFs or other document-based forms, and the number of these forms is growing by roughly 6% every year. These forms are usually inaccessible, hard to use and, on average, 8 minutes slower to process compared to online forms.

Currently, PDFs and other document types are easier to create than online HTML forms, especially for teams without any digital specialists. However, this comes with significant drawbacks.

In particular, PDFs can behave inconsistently with assistive technologies, such as screen readers and magnifiers. They can also be difficult to use on smaller screens. For those interested in more detail around this, we've written previously about why GOV.UK content should be published in HTML and not PDF.

We’ve identified 3 key constraints which will affect our solution to this problem.

Firstly, the majority of these forms are created by small operations teams without dedicated Digital, Data and Technology (DDaT) capability - these teams don’t have the budget to develop HTML forms themselves.

Secondly, the scale of the problem means that the current pace isn’t fast enough - we estimate that it would take the 11 existing form-building service teams around 70 years just to convert existing PDF forms into HTML forms, let alone deal with the 6% annual growth.

Finally, the content designers who manage the specialist guidance and publishing on GOV.UK are already dealing with high workloads - increasing the pace of the current form building process would potentially overwhelm these teams.

For our solution to work within these constraints, it will have to be:

What has been done before?

Teams across government have been developing form-building platforms, and the cross-government form-building community was founded to coordinate these teams and avoid duplicating work. This process resulted in the creation of browser-based editors like XGov Digital Form Builder and MOJ Forms, and code-based editors like the GOV.UK Design System Form Builder created by DfE Digital.

These are very capable solutions, and we hope we'll be able to make some use of them. However, they're currently aimed at digital specialists rather than generalist users; we’re aiming our service at teams that don’t necessarily have any specialist digital skills.

There are also some commercial form-builders on the market, but we aren't currently convinced that these are suitable: we want to provide a solution that's accessible for all users, and not prohibitively expensive for small operations teams.

What are we doing now?

Currently, we're building a team - we're in the process of recruiting an interaction designer, a service designer, technical architect, developer and content designer.

We're conducting user research with participants from across government so that we can further investigate how document-based forms come to be published on GOV.UK and where the problems are for users.

We've been reviewing the existing government form builders for accessibility to see what they do well and how we might make use of them.

We're also working out how much time and effort the platform can save service teams, in preparation for the next spending review.

Alongside all of this, we’re working with the cross-government form-building community to define what a good lower-volume form looks like and how we can embed the principles of the Service Standard into our product.

What are we doing next?

Our intention is to start the alpha phase in the coming months. We’re interested in partnering with other government organisations - if you think this platform would be useful in your organisation, we want to speak to you. Similarly, if you work in operations or know someone that does, we’d love you to help test our platform - please email us.