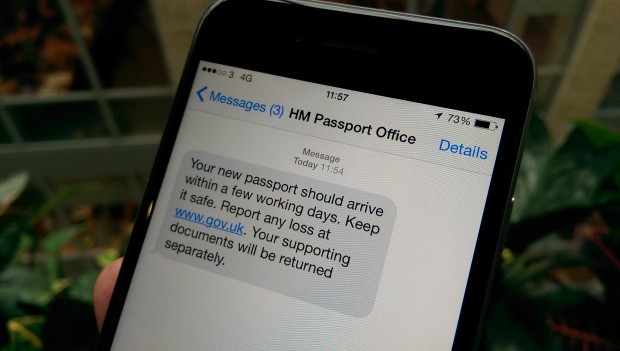 We want to see how platforms can improve the way people communicate with government. As part of this, we’re starting discovery work on status tracking and notifications. Put simply, we want to improve how we keep people updated when they’ve asked government for something.

By quickly telling people that we’ve received their application, made a decision, or when they can expect to receive their money/passport/license etc we can keep them informed, and reduce the need for them to pick up the phone.

Know when government receives the thing

DVLA gets 2.4 million phone calls every year from people just checking the status of their application.

Finding ways to reduce the time people have to spend chasing government can make a big difference. For example, the Carer’s Allowance team in the Department for Work and Pensions (DWP) reduced unnecessary calls by nearly 40% - simply by sending people an email to say their application has been received.

There are other good examples of keeping people better informed across government. But, we’re repeatedly having to solve this same issue and in different ways.

Platforms will make it simpler and faster to communicate with government.

Status tracking and notifications are some of the common building blocks for Government as a Platform. They’ll make it quicker and easier for teams delivering digital services to just plug in the bits they need as they build new services, and iterate existing ones.

This gives us an opportunity to improve people’s interaction with government and avoid millions of unnecessary phone calls and letters.

Know when you'll get the thing

There’s also the potential to let people know more accurately when they’ll receive the thing they’ve asked for. Rather than always telling users the longest time something could take, we’ll use data generated by the platforms to give people a more precise timeline.

Over the next few weeks, we’ll be talking to loads of service teams to discover common user needs, and test a bunch of hypotheses. We’re already working with several trailblazing teams across government - DVLA, Land Registry, and DWP’s Carer’s Allowance to name just a few of many. And we’ll be blogging about it as we go.

If you work in government and want to get involved - please let me know.

Pete Herlihy is a Product Manager at GDS.