Departments' Digital Strategies showed how far the impact of digital has been within government. For the Foreign and Commonwealth Office (FCO), the addition of social media tools to the diplomatic arena will be incredibly important, as Chief Digital Officer Alison Daniels explains.

Like many organisations the FCO's communications teams are well versed in the opportunities social media provides, from distributing and amplifying consular messages to British nationals, to engaging audiences on tough foreign policy issues, to using digital channels to seek views as we formulate policy.

As well as producing the FCO’s Digital Strategy we have been writing social media guidance for our staff. We want to encourage them to make full use of social media in their day to day work.

Social media as a diplomatic tool 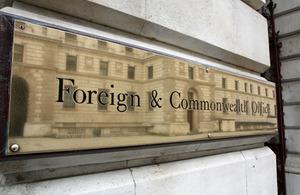 At the FCO we have a well-established social media presence. Twitter has been embraced by six of our seven ministers, our Permanent Under Secretary Simon Fraser and many of our Ambassadors and senior officials in embassies around the world.

We’ve described some of the ways we’ve been using social media in these case studies, and we've blogged about our social media highlights from 2012 on our digital diplomacy blog.

But in our Digital Strategy we set out our aim of embedding digital more comprehensively across every element of foreign policy work.

While working on the Digital Strategy, we learned from feedback that there was a fear of 'getting it wrong' and an uncertainty about the use of social media in a personal capacity. So we tackled both those issues.

Our guidance keeps the ‘what not to do’ bit to a minimum, so we encourage staff rather than disuade. We’ve kept the rules as simple as we can: don’t say anything on social media that you would not say on any other public channel. In other words, remember you’re a politically impartial civil servant even if you’re posting in a personal capacity.

When our overseas staff use social media they are still effectively seen as representing the FCO and HMG, even if they don't mention their job in their profile.

For official accounts we’ve put in place a simple ‘go ahead’, ‘check’, ‘don’t do it’ framework before hitting ‘post’.

Of course we have also had to accept that mistakes may happen. But we are also confident that guidelines, training and examples of best practice will ensure that staff are equipped to avoid making them. If mistakes are made, we’ll deal with them on a case by case basis, focussing on the substance rather than on the medium.