E-petitions is the very first product delivered by GDS and last week it celebrated its first birthday. Pete Herlihy, product owner for e-petitions reviews the year in numbers.

It’s been an eventful and productive first 12 months, both in terms of how widespread the use of e-petitions has become and also in terms of the iterations we’ve made to the service during that time.

A year on from the first public release, we have an opportunity to look back and see how e-petitions has been doing, by highlighting some of the numbers that provide insights into how the service is used and what its impact is on Parliament and the democratic process. 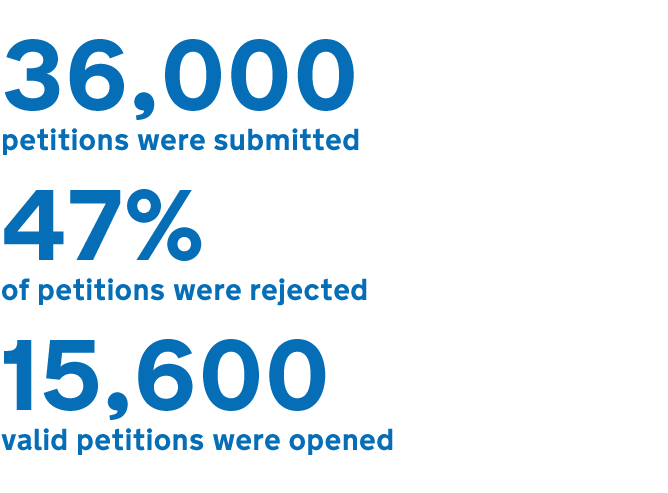 Looking at the numbers above and the list of petitions , the range of issues that motivate people to start an e-petition is striking. Even discounting the high proportion of e-petitions that are rejected for not meeting the service’s terms and conditions (duplicates, things outside Government control etc), there is still an average of 1,300 valid e-petitions being started every month. 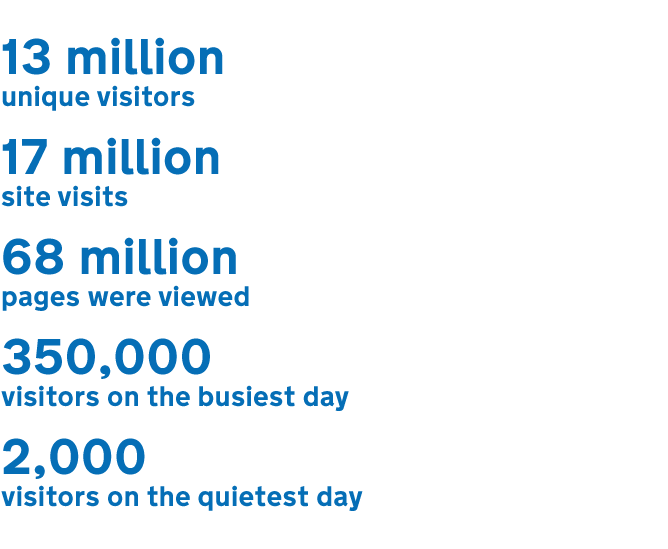 The annual number of visitors and the number of visits they each make amount to some very large numbers, far greater that some major departmental websites for instance. The unique visitors equate to more than a quarter of the UK’s population over the age of 16 having visited the e-petitions website.

There is a hint in the month to month breakdown below, of the large fluctuations in visitor numbers on any given day.  The chart also shows just how variable the demand on e-petitions can be - propelled by real world events.

The large peak in the chart was primarily due to the huge support for a petition raised during the London riots  in August 2011. Whether or not you agree with the sentiment of the petition, these numbers demonstrate the importance of having a forum for people to have their say and interact with politics. 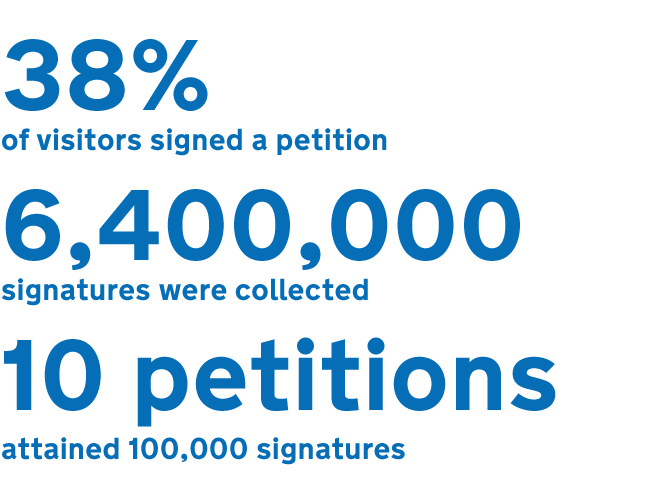 With over a third of visitors taking action and signing an e-petition, this represents the equivalent of collecting 12 signatures every minute since the service launched.

I asked the Office of the Leader of the House of Commons how well they thought e-petitions has worked in terms of public engagement with politics:

“Debates relating to e-petitions, such as that on the release of papers relating to the Hillsborough disaster, saw some of the highest viewing figures for television coverage of Parliament and have seen the Government change or clarify its position. The site has allowed people to raise issues that would have otherwise not been considered in Parliament and gain public support for their campaigns. The Government continually seeks to engage the public with all aspects of the political process, having recently launched its latest Public Reading Stage  to allow people comment on laws being debated in Parliament.”

High praise indeed for a mode of participation that has been live for merely a year.

With initial delivery costs of around £90,000 and ongoing running costs of around £30,000 per annum, e-petitions is one of the cheapest government services to facilitate. The cost of e-petitons in the first year works out at 2p per transaction and it is expected that this will fall to under 1p in it’s second year and beyond.

As is the GDS way, we’ll continue to listen and iterate on e-petitions. Our next area of focus will be making it easier for petitioners to engage with MPs, especially on those petitions that may not attain the 100,000 signatures, but are still that are worth investing time in. Keep an eye on this blog for developments.