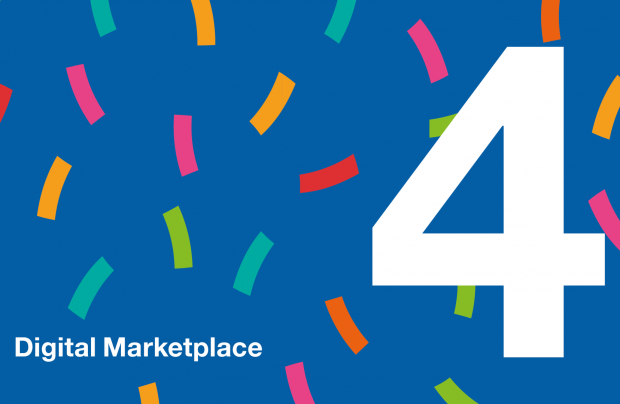 The Digital Marketplace has transformed the way the public sector buys IT and digital services since its launch 4 years ago. By opening up the procurement market to suppliers of all sizes, rather than just large technology companies, it has led to increased competition, lower prices and more specialised and local suppliers.

As of the end of July, more than £4.22 billion has been spent through the Digital Marketplace with more than 90% of the suppliers being small and medium sized enterprises (SMEs).

As the Government Digital Service and the Crown Commercial Service (CCS) celebrates our collaboration and fourth birthday, we thought it would be a good time to take stock and call out just a couple of things we’ve achieved over this past year and look at where we’re going.

CCS has led on setting up the UK’s first public sector digital buying community. It’s been incredibly popular with attendance at meetups increasing five-fold in just 6 months. This work has also supported the Local Digital Declaration through its inception, launch and expansion.

We also spoke to London’s Hackney Council, a Digital Marketplace buyer, which was able to quickly and securely find the right digital expertise for their organisation and help retain and recruit foster carers.

Do the hard work to make things simple

We wrote about this work in more detail in May, which included implementing a privacy notice, retention schedules and contract variations.

We’ve helped deliver the new public sector contract by working as a multidisciplinary team with CCS policy and the Government Legal Department.

We’ve continued our ‘business as usual’ activity with CCS, including delivering the next iterations of its G-Cloud (G10) and Digital Outcomes and Specialists (DOS3) commercial agreements.

We’ve also been looking at how we might apply the lessons learned from designing, delivering and continuously improving the Digital Marketplace to support a broader range of:

We want to work with UK suppliers to transform government procurement in emerging economies and help create new opportunities in overseas markets.

We've previously blogged about the Global Digital Marketplace project, where we visited 6 countries to assess the feasibility of working with them.

In the next few months I’ll be making a further announcement on this project.

We look forward to growing the marketplace, encouraging more public sectors to use it and sharing our learnings with our friends and colleagues in international governments.

For more information you can: