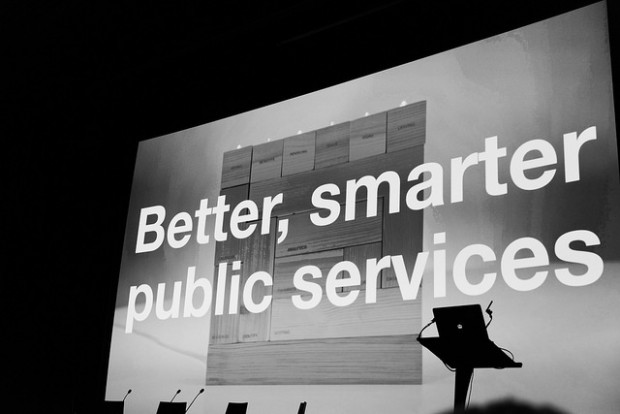 So far we’ve talked about the technology that makes Government as a Platform work, and the technical benefits it brings, but less about the more tangible benefits for everyone else in government. For policy people, for front line staff, for service managers, all the way up to permanent secretaries and ministers. What does Government as a Platform mean for them? And what does it mean for the rest of us?

Here's what it means:

Services will be quicker, easier, and cheaper to create

Platforms exist to solve problems common to all or many government departments. They are interconnected components of a larger system.

With these shared components doing all the hard work behind the scenes, service teams can focus solely on building what their service needs to do, and don’t have to worry about procuring a whole stack of stuff alongside it.

If your new service requires some sort of payment to government from users, you could plug it into a cross-government payments platform rather than procuring some bespoke payments system just for your service (which would take much longer and cost a great deal more).

Another example: if you want to notify your service’s users that something’s happened (such as, “We’ve received your application” or “We got your payment” or “Your licence has been issued”), you could plug into a status notifications platform which will make it easier to send them emails or texts. No need to build your own bespoke notifications system, which again, would take longer and cost more.

Another component is data. Right now, government data is stored in many different ways, frequently duplicated and hard to keep up-to-date. All those problems make it hard to put to good use. We have bad data, not good data.

When we start building platforms, data becomes another shared component in the system. Standards ensure it is accessible by other components. It is maintained and curated by departmental teams who understand it best. Users are given control over their personal data, so they can choose which services can see it and when.

Not all the components are technology components. For example, we’ve put together design patterns and a development toolkit, which distilled months and months of user research into a set of interaction and design patterns that we know work well with a diverse range of users. This is often the bit that people building services say is most helpful for them when they want to get started quickly.

In a world of platforms, you find out what users need earlier in the process, so you know sooner whether or not you’re building the right thing.

When it's so simple to create services, you can create them as experiments. They can be almost disposable.

Platforms give us a digital infrastructure to build services on: an ecosystem of components that’s not closed and locked away inside a proprietary stack of technology and processes, but based on standards and open to all. The entire public sector can use it. So can third parties. Which brings us to the next thing.

Government’s current siloed approach stifles innovation, and leads to various problems such as:

If we create platforms based on open standards and interoperability, we automatically create competition and drive innovation. That means more providers and lower costs.

We can boost a nascent market of providers, building upon our open services - a market that has, until now, been held back by the contracts that locked us into those closed, proprietary systems.

Companies, charities, clubs and co-ops can use the same infrastructure to set up additional services that government can't justify, or can't afford.

Programme Director Janet Hughes explains it brilliantly in the presentation she gave recently at the Follow the Entrepreneur conference: without that market influence, if government had tried to procure a solution a few years ago, the specification would already be hopelessly out of date. The market brings innovation, and innovation brings better identity services.

Services built on platforms are much more flexible.

Change happens: government policy, global and local politics, governments themselves, all of it changes over time. Services built the old way struggle to adapt, or even change at all. Trapped in the structure that was imposed on them from the beginning, service delivery teams invent clever workarounds. Over time, things get messy.

Built on platforms, that no longer applies. Services are separated from the things that make them work (things like data and technology). Every service rests upon an ecosystem of components that can be snapped together or pulled apart whenever needed.

So when policy changes, or when circumstances force change to happen, it can. Quickly, without fuss. Perhaps some of the components a service is built on might need to be replaced - which isn’t a problem when you’re using platforms. Everything’s built on standards and designed to interconnect. You swap out the old and snap in the new. Users don’t need to notice, or even be told (unless the service offered to them is changing).

This last thing is the inevitable consequence of the previous ones.

The result? We get more services, we get better services, and for less money than before.

That’s what Government as a Platform means. That’s why it matters.