On my recent trip to Korea, I was hugely impressed by the technological innovation on display and by the progress on the digital development of the public sector. That why it was a pleasure yesterday to see GDS host a ceremony for the signing of Memorandum of Understandings between the UK and Republic of Korea.

A memorandum of understanding is a written agreement between two parties - in this case, two governments - that sets out the principles for cooperation. The three agreements on digital collaboration were signed by Francis Maude, Minister for the Cabinet Office and Choi, Mun Kee, Minister of Science, ICT and Future Planning.

The focus of the agreements is on technical standards and building digital government services based on open principles. The ceremony coincided with the State Visit to the UK of the President of the Republic of Korea, Park Geun-hye. 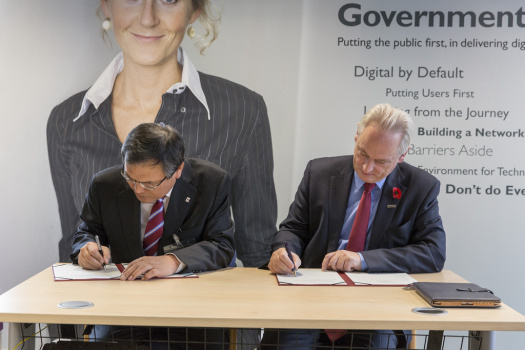 As demonstrated in last month’s Conference on Cyberspace in Seoul, we have much in common with Korea, but we also have much to learn from each other. Yesterday’s signing commits both of our countries to creating digital public services that put the needs of the citizen first, and I’m excited that we’ll be working more closely together.