On 1st July the Office of the Public Guardian (OPG) launched the beta of the Lasting Power of Attorney digital tool. Service manager Kit Collingwood wrote about the release on the MoJ Digital blog, and we asked her to write about what they've learned since.

Even though it's only been six weeks since we've launched, we've already learned a lot. Overall, our experience of going live has been great and the feedback so far has been brilliant – I've got to use my favourite line from a member of the public: 'Dear Sir: this is the best government website I've ever used !'

However, nothing ever goes 100% to plan – that's where the fun and the challenge lie. We're really cutting our teeth on the LPA service and, though we've got an amazing cross-agency team and had prepared really well for launch, you can't predict exactly what will happen when you go live. In the event, it has been easier in some ways and harder in other than we'd expected – here are our top lessons: 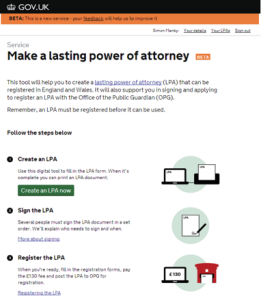 Keeping the LPA service running, and improving it, is jointly owned by the OPG and MoJ's Digital Services Division. The two agencies are working across different locations, and we've found that building a single-team ownership of support and continuous deployment has taken some real effort.

The model is now working well; we're going from writing user stories based on feedback to deploying changes in a matter of days, as well as fixing bugs in minutes or hours. We’ve also learned that you can't mimic live services perfectly before you launch – some bumps in the road are inevitable (and are learning opportunities) and smoothness only comes from practising together.

We'd planned for the tool to be a 'soft launch' with very little fanfare, before increasing visibility of the service when we felt confident that it was running smoothly. In the event, we had more interest in the tool than expected and, while that's great, it presented a couple of issues too.

I'd suggest to others launching similar services to future-proof systems and models – more people might want your service than you'd have thought – and to be aware that in the world of social media, there's no such thing as a soft launch of a public service any more!

We are putting the user at the heart of everything we do – we want the service to work for the people using it. However, we've found that there are a few people who have problems with the service which, when we've looked at them, we just can't fix while keeping the main features and aims of the tool in place. In these cases there's a judgement to be made: will this feature help or hinder the majority of users? No service will be perfect for every user, so we've aimed at the many rather than the (very) few.

The issues never come where you think they're going to

Before we launched, we predicted where some problems may arise; for example, we knew that only through user feedback would we know exactly how to pitch the guidance in the tool. In the event, the guidance hardly needed tweaking; in the mean time, other aspects weren't working as well, so some effort went where we hadn't planned. We've definitely learned that only in live service can you know what's going to go stunningly well, and what will prove to be more complicated.

As ever, happy to chat about any of this: @kitterati on twitter or email kit.collingwood@digital.cabinet-office.gov.uk