A few relatively quiet weeks have been building up to a busy five days at GDS. More releases, an office reshuffle and some special guests all combined to make sure we don’t go quiet in the run-up to Christmas.

The big focus of the week was the move of more departments over to GOV.UK. BIS, MOD, FCO and the Attorney General’s Office joined DCLG and DfT, along with several other organisations. It’s terrific work, and huge thanks to the teams both here and in those departments to make sure things were ready for the 6am switchover yesterday. Very nicely done.

That release leads directly into a bit of work the GOV.UK team have been doing to get Travel Advice ready for release next year. They’re also working on Welsh-language versions of some of GOV.UK’s most popular pages, which we’ll tell you more about next week. Alongside that they’ve released updates to the child maintenance calculator and been talking to the content and analytics teams about making some improvements to page slugs.

All of that took place after a bit a of a reshuffle. Tony Singleton and his team have been poring over desk plans for a couple of weeks, making sure there’s space for everyone to work together on projects old and new in 2013.

Over the past year we’ve been working closely with Liam Maxwell and the IT Reform Group within Cabinet Office, and I’m delighted that they are now part of GDS. Liam will be taking on an important new role as Chief Technology Officer (CTO) for HM Government. Each department already has its own CTO or someone very close to that role, and after Christmas Liam and I will write more about how we will deepen collaboration with them.

We’re also entering the final stages of work on the Assisted Digital strategy, as well as the Departmental Digital Strategies. As with the move to GOV.UK, it’s been humbling to see colleagues throughout government work together to produce a roadmap for service design over the coming years.

And just this morning we had the pleasure of welcoming Sir Tim Berners-Lee into GDS. He spoke to some of the developers who have been working on GOV.UK about a few of the gritty problems they’re facing, like how best to expose data for other services and how to continue building capability across government. It was an informal chat, but still invaluable to hear from someone who helped create the Web all of our services are part of.

Finally, I’d like to wish a very happy birthday to Norm, who proved an excellent Master of Ceremonies at the GDS Christmas Quiz on Tuesday. Well-dressed too... 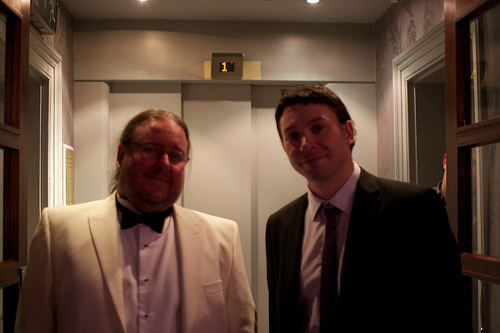