The department for Business, Innovation and Skills (BIS) has been working with GDS since before GDS existed to help get department websites ready for the move to GOV.UK. John Turnbull from BIS explains what it’s been like to see the project evolve.

I’ve worked on quite a few web projects in the classic project management style. In these the focus was very much on the process and the specification, rather than the product; you’d have to specify so much, and in such detail, that it often took a very long time for anything to get built. But in the last year, BIS has been working with GDS in a very different way.

Back at the start

At BIS we first got involved with the single government domain back in August of 2011. Our then Head of Digital, Neil Williams, started working with the newly formed GDS part-time, before moving over to the team full-time as the Inside Government project gathered pace.

Back then we knew what the basic shape of the product was going to be: a place for users to find out about government policy. But we didn’t know much beyond that.

Things became clearer as we went along. Our minimum viable product showed one way of presenting government policy, and that grew as we identified new types of content to be catered for.

Within BIS the range of policy work is probably broader than for any other department; we’ve got everything from innovation and education to consumer issues and trade and investment.  So we spent those first few weeks of the Inside Government beta struggling to find a way to present our policies.

Eventually we came up with the Issues and Actions format. We got a clearer idea of how we needed to present this information last February, when we started to put content into the publisher and watched the pages go live. 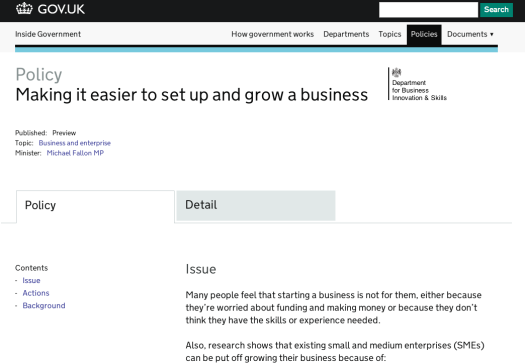 We realised that we needed new features as we went along, rather than specifying them at the start. Doing it this way around is far better: it feels like we’re getting a more useful product.

It wasn’t just the product that became clearer. Some of the communication with GDS has been muddy, as Paola Wright mentioned in her blog post.

In the early days, there weren’t many people at GDS working on Inside Government and they were focused very much on the product, which meant we didn’t always know what stage things were at or what was being worked on.

That’s been much improved with the addition of various members to the team, such as Suzanne D’Arcy (our liaison at GDS), and more recently Janet Hughes.

I’ve enjoyed going to the meetings with the other departments, especially over the last few months as we approach next week's release. GDS has taken on board the feedback from departments as the products have been developed. This includes the guides mentioned by John Ploughman and BIS's own detailed content. It’s been a very collaborative process.

We’re currently focussing on alerting and communicating with our users, some 40,000 of whom use our email notification service to keep up with changes and updates to BIS's policies.

GDS is implementing a similar service, which it will be rolling out across government. I need to ensure a smooth transfer of as many of our subscribers as possible to the new service, but given the new ways in which policies are being presented on GOV.UK it’s not straightforward.

The nature of agile development means that we can't expect to have all the features we want. After our content is published in December we’ll see how colleagues and users react to BIS's presence on GOV.UK. We’ll take it from there in terms of requesting new features or functionality, as well as how we can improve what’s already there.

A year ago we had an idea of where Inside Government was going, but even then it was only a fraction of what it’s become. It’s been exciting to see it unfold.