Last Thursday the second iteration of a tool to allow comments on Bills passing through the House of Commons process went live. Steph Gray from Helpful Technology explains why a second iteration was needed and how putting users needs first shaped his approach.

In the Coalition Agreement, the Government committed to introduce “a new ‘public reading stage’ for bills to give the public an opportunity to comment on proposed legislation online". The first pilot of this entirely new consultative concept launched last summer, putting the Protection of Freedoms Bill online for comment clause-by-clause.

The idea of getting input on the shaping of legislation, as well as policy, is clearly gaining some traction. Last Wednesday, the Department of Health launched the draft Care and Support Bill in 'commentable' form alongside a site aimed at more wide-ranging engagement with the issues it covers. Stephen Hale, head of Digital at the Department, explains the approach they've taken on his official blog.

So it was great to be asked about 4 weeks ago by the Innovation team at GDS to help with the second iteration of the Public Reading Stage concept, this time with the Small Charitable Donations Bill. The tool we've developed went live last Thursday at http://publicreadingstage.cabinetoffice.gov.uk.

Minister for the Cabinet Office Francis Maude has welcomed the launch of the improved online Public Reading Stage tool. He said:

“This is just the sort of innovative, citizen-focused technology that GDS was set up for – helping to open a door into the business of government.

Traditional consultations on legislation have tended to be narrow and exclusive. This online channel makes it easier for ordinary people to scrutinise government plans and put their own ideas, thoughts and concerns into the legislative process and influence parliamentary debate.

The first version of the tool allowed us to test the technology. For this second iteration, GDS have listened to the feedback from users and developers to make it even easier to use.”

Enabling public commenting on documents has been around in government for at least three years now, including commentable versions of the Power of Information Task Force report in 2009 and the Digital Britain report set up by Joss Winn and Tony Hirst from WriteToReply.

We've learned a few things about how users engage with these sorts of sites:

For this project, we started from some user stories developed by the Office of the Leader of the Commons working with the GDS Innovation team, and developed an initial wireframe to address them. Perhaps unusually, one of our key stories was to direct users to other ways they might influence Parliament or Government on this issue, since the language of Bills is inevitably technical and other channels - writing to your MP, starting an e-Petition, responding to a policy consultation - might be more effective and accessible for some users. It's not an accident that the site looks quite similar to its initial wireframe: though all contributions are welcome, the audience most likely to find participation on this site rewarding are specialists comfortable with legal and policy texts. 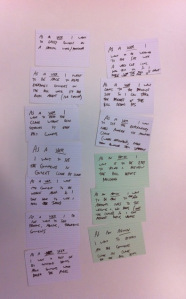 In the short time available, the platform we've developed aims to improve the user experience of commenting on documents and hopefully enable that feedback to be used more effectively. We opted to use WordPress for this project. This keeps costs down, effectively giving us a community-supported, open source, lightweight publishing and commenting system on top of which we've created quite a lot of new content types and functionality.

It's been great to have the advice and support throughout of engagement and online legislation specialists including John Sheridan and Jeni Tennison from legislation.gov.uk, Antony Zacharzewski from the Democratic Society, and Richard Parsons from eDemocracyblog.com - thanks to all of them, as well as Ben Sneddon from the Office of the Leader of the House of Commons and Roo, Alex and Ade from the GDS Innovation team.

We'd like to hear what you think about this way of presenting long, technical documents for online comment, so please use the feedback form on the site to help us improve it. If you're a developer, feel free to take a look at the project code on Github, and suggest your own improvements.