The big news this week has been the transition of two central government departments and three agencies to GOV.UK. Following the release of GOV.UK last month, it’s the next step towards establishing a single domain for government. Huge congratulations to everyone involved for months of hard work, and special thanks to all the people in departments and agencies doing hard work to make this happen.

Now it is time to focus on moving 22 more central government departments and even more agencies and arms length bodies to GOV.UK.

But that’s not the only thing we’ve been doing at GDS this week. Support of GOV.UK continues, with more than 200 items published in the last week. There’s also been a lot of focus on improving the Licence Finder, with iterations made to that throughout the week. And we’ve been conducting user testing sessions on Inside Government in Leeds and London.

You may have seen on the blog earlier this week with footage from a visit Tim O’Reilly and Jennifer Pahlka made to GDS on Monday. It was an honour to welcome them to Aviation House, and also to hear about the impact things like our Design Principles have had on the work of people outside of the UK government. It’s a terrific validation for the idea of doing work like this in the open.

We’ve also been contributing to blogs elsewhere. Dave Mann, a GDS delivery manager, wrote a case study about how we collected user feedback during the alpha and beta of GOV.UK for the Open Policymaking site. It’s important to get more of what we’ve learned on the way out in the public, and it’s great to see the team’s work being celebrated - and scrutinised - in places like this.

I’ll leave you with a couple of shots of the Inside Government team taken in the early hours of Thursday morning. 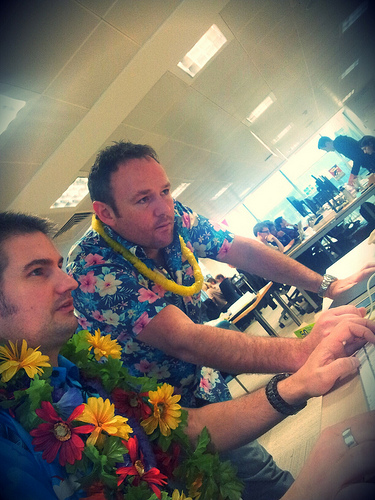 Neil and Pete just before release